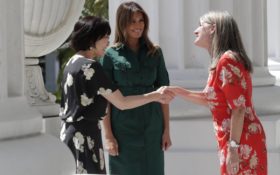 First Lady Melania Trump is giving her Japanese counterpart a tour of a Palm Beach mansion.

The first lady took Akie Abe to a Gilded Age mansion on Wednesday. The Whitehall mansion is a few miles from President Donald Trump’s Mar-a-Lago resort. Trump is meeting with Japanese Prime Minister Shinzo Abe at Mar-a-Lago this week.

They arrived in a motorcade and were greeted by museum staff. They entered without speaking to reporters.

Oil and railroad magnate Henry Flagler built Whitehall at the turn of the 20th century as a wedding present for his third wife, Mary Lily Kenan Flagler. The 75-room, 100,000-square-foot (9,290-square meter) mansion served as the couple’s winter retreat starting in 1902. Henry Flagler died in 1913 after he fell down one of Whitehall’s marble stairways.