Melania Trump shocked the world when she showed up here... - The Horn News 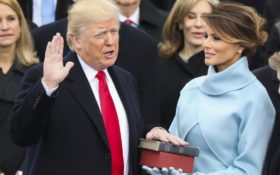 Tired of the fake news media, First Lady Melania Trump surprised everyone when she made an unannounced visit to a Texas facility Thursday to get a first-hand look at some of the illegal immigrant children being held after their families entered the country illegally.

The first lady’s stop at Upbring New Hope Children’s Center in McAllen came the morning after President Donald Trump signed an executive order halting the practice of separating these families. She may also visit a second facility later in the day. Trump had come under pressure to do something about the practice, including from GOP allies and the first lady herself, following a public outcry sparked by widespread images of children held in fence-like structures.

The trip was intended to lend support to those children who remain separated from their parents, said Stephanie Grisham, the first lady’s spokeswoman.

“She wanted to see everything for herself,” Grisham said.

The president had insisted that his administration had no choice but to separate families apprehended at the border because children cannot go to jail with adults who are being criminally prosecuted for crossing the border illegally. Trump said only Congress could fix the problem longterm and he specifically pointed a finger at Democrats for refusing to consider immigration reform.

He took a step Wednesday at temporary relief by signing the order ending separations and keeping families together when they are in custody for the next few weeks. But the order won’t last, and the broken immigration system remains.

Accompanied by Health and Human Services Secretary Alex Azar, Melania met with the executive director of the facility and other staff in a makeshift conference room where she was told the staff treated the 58 children housed there as if they were their own.

The first lady asked that the children be reunited with their families “as quickly as possible.”

The trip came together within the past 48 hours, Grisham said. “She told her staff she wanted to go and we made that happen.”

Trump, speaking at a Cabinet meeting, said that his wife was “down at the border,’” and Grisham said that the first lady had the full backing of her husband.

“She told him ‘I am headed down to Texas’ and he was supportive.”

Melania, whose focus as first lady is on child well-being, appears to have been among those pushing her husband to act.

Grisham released a statement last weekend saying the first lady “hates” to see children separated from their families and “believes we need to be a country that follows all laws, but also a country that governs with heart.”

Hours before Trump used his executive order to halt family separations, a White House official let it be known that Melania had been voicing her opinion to the president for some time, including that he needed to help families stay together. The official refused to be identified discussing Trump’s private conversations with his wife.

Trump acknowledged Wednesday that the mother of his 12-year-old son, Barron, had been prodding him.

“My wife feels very strongly about it,” he told reporters after he signed the order.

The last-minute trip to Texas marks the first public action by Melania since she announced in May an initiative named “Be Best” to focus on the overall well-being of children and help teach them kindness. She had been expected to travel to promote the campaign but was sidelined a week after the announcement following surgery to treat a benign kidney condition.