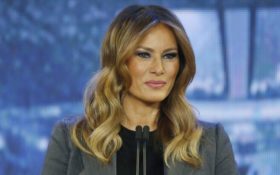 First lady Melania Trump opened up a bit Wednesday about life in the Trump White House, where 12-year-old Barron is more interested in sports than social media, she has no inclination to make casseroles and she thinks the red topiary trees work just fine as part of her holiday decor.

Mrs. Trump spoke at a forum at Liberty University in Lynchburg, Virginia, to raise awareness about the opioid epidemic, one pillar of her “Be Best” initiative. It was a rare appearance in which she took impromptu questions from an audience.

The first lady said she’s talked with Barron about the dangers of opioids and other drugs.

“I teach him what is right, what is wrong,” Mrs. Trump said. “I will always tell him that drugs — they could be very dangerous and they could mess up your mind and body, and to love yourself more than you love drugs.”

She had a ready response when asked about criticism of the red holiday topiaries lining the East Colonnade that some have said look creepy.

“We are in 21st century and everybody has a different taste,” she said. “I think they look fantastic. … In real life, they look even more beautiful.”

Mrs. Trump said both she and the president have packed schedules, but they try to have dinner together in the White House and “just talk what’s happened through the day.”

“When you’re first lady, there’s no free time,” she added.

Asked if she ever gives the White House chefs a night off and heads to the kitchen to make a casserole, Mrs. Trump paused before offering: “Not really. We can do that. Maybe in the future when I’m a little bit less busy.”

The first lady said that she knew she would be criticized about her “Be Best” initiative to promote healthy living and encourage kindness, respect and positive online behavior. She said Barron doesn’t engage in social media because he’s “all into sports.”

She added that, for all the importance of civil behavior: “Sometimes you need to fight back, I’m sorry.”

Asked if she’ll write an autobiography, the first lady said she hadn’t thought it about it, but added that “what’s going on in my life” could produce “many books.”

One part of the first lady’s “Be Best” initiative is about fighting opioid abuse. Nearly 48,000 people died last year from overdoses involving opioids. She stressed the importance of getting rid of the stigma associated with opioid or other substance addiction.

Azar said opioid addiction is not a “moral failing,” but a “medical issue.” He said fewer of the drugs are being prescribed, and that since January 2017, legal opioid prescription use is down more than 23 percent.

Nielson said her agency works to prevent illicit sources of opioids from getting into the United States. She noted legislation that President Donald Trump recently signed to help tackle the opioid crisis, the deadliest epidemic of overdoses in the country’s history.

The legislation will add treatment options and get the U.S. Postal Service to screen overseas packages for a synthetic form of opioids called fentanyl that are being shipped largely from China.

“Much of the fentanyl is still coming from China through the mail,” Nielsen said. “About a pound of fentanyl can cause 150,000 deaths. That’s how fatal fentanyl is.”