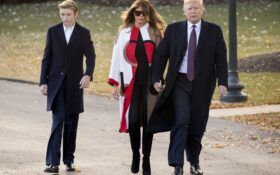 Melania Trump has been reluctant to voice her opinion on attacks against President Donald Trump and the first family by the mainstream media over the past three years.

But following Father’s Day weekend, she condemned the Food Network after a prominent network host made an “inappropriate” comment about her son Barron Trump.

“I hope Barron gets to spend today with whoever his dad is,” he said in a post.

The low blow had since been deleted and Henson attempted to clarify his statement on social media to downplay his comments.

“With respect, I think you dissecting it is the issue,” he wrote, responding to social media users. “The joke was aimed at Trump and the mere mention of Barron’s name doesn’t mean it’s at his expense. Although I respect your right to take issue with it.”

With respect, I think you dissecting it is the issue. The joke was aimed at Trump and the mere mention of Barron’s name doesn’t mean it’s at his expense.

Although I respect your right to take issue with it.

She released a statement through her spokesperson and former White House Press Secretary Stephanie Grisham: “Sadly we continue to see inappropriate and insensitive comments about the president’s son. As with every other administration, a minor child should be off-limits and allowed to grow up with no judgment or hate from strangers and the media.”

The latest spat is just another incidence of those in the media speaking out on Barron Trump.

Just as recently as December, a Stanford law professor tried to attack Barron during the Democrat-led impeachment trial.

“The Constitution says there can be no titles of nobility,” Professor Pamela Karlan wrote on Twitter, “so while the president can name his son Barron, he can’t make him a baron.”

“A minor child deserves privacy and should be kept out of politics,” Mrs. Trump replied at the time.

“Pamela Karlan, you should be ashamed of your very angry and obviously biased public pandering, and using a child to do it.”