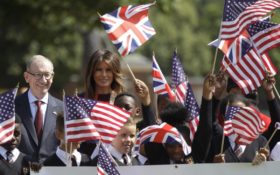 Her game face on, Melania Trump dutifully tried her hand at lawn bowls during a solo outing Friday to a historic London veterans’ retirement home on her first visit to Britain as America’s first lady.

The pair toured the hospital grounds before joining a small group of elementary schoolchildren and veterans in making red paper poppies, a national symbol for remembering and honoring those fallen in war.

She greeted the children with a cheery “Hello” and a big smile, shaking their hands and asking one to show her how to make a poppy pin.

Reporters were shooed out of the room as the first lady engaged the group in a discussion about “Be Best,” a campaign she unveiled in May to focus on childhood well-being and to teach them kindness.

She ended the visit with a game of bowls with May, the children and the veterans.

Wearing a sleeveless multicolored dress by British fashion designer Victoria Beckham and spiky flesh-tone stilettos, Mrs. Trump appeared to take the game seriously and followed a boy’s advice on how to hold the ball. She stooped several times to roll it across the lawn, smiling and making a few faces.

Children waving British and U.S. flags cheered loudly. She also initiated a high-five with a veteran who gave her effort a thumbs-up.

The first lady’s appearance came amid her return to the international stage after she was hospitalized in May for a kidney surgery and dropped out of sight for nearly a month.

Mrs. Trump and the president were reuniting later Friday for a return trip into the country for a social visit and tea with Queen Elizabeth II at Windsor Castle. The couple planned to head afterward for a private weekend at one of Trump’s golf properties in Scotland.