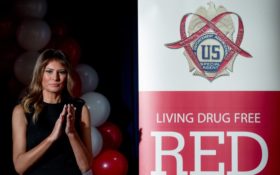 It will be game, set and match at the White House.

Melania Trump has announced construction of a tennis pavilion on the south grounds that she says will provide a “functional recreational area for all First Families to enjoy.”

The First Lady helped break ground on the project Tuesday.

Few details about the project were announced, including its size, cost and timeline for completion. Mrs. Trump’s office says private donations will cover the cost.

President Barack Obama was an avid basketball player, and he turned that court into one suitable for basketball.

President Trump had been a regular spectator at the annual U.S. Open tennis tournament held in his native New York, but he has not attended since taking office.