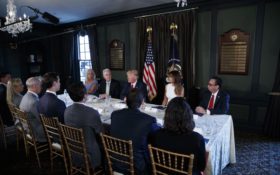 Melania Trump has invited experts and people affected by addiction to opioids to the White House for a listening session and discussion about the epidemic.

The first lady is hosting Thursday’s event in the State Dining Room and has invited journalists to attend a portion of the meeting to help raise awareness. She joined President Donald Trump at a briefing on the crisis during the president’s vacation last month at his New Jersey golf club.

Stephanie Grisham, a spokeswoman for Mrs. Trump, said the first lady met regularly during the presidential campaign with families who had been affected by drug abuse and addiction.

She said Mrs. Trump wants to work in tandem with the president’s drug commission on youth and prevention initiatives.

“The opioid crisis is the deadliest epidemic in American history, and it is getting worse,” Grisham said in an email. “It affects children of all ages, even before they are born. As a mother, and as first lady, she is anxious to use her platform to help.”

Grisham added that the first lady is focused on the overall well-being of children.

The president said last month that he will officially declare the opioid crisis a “national emergency,” but he has yet to issue a formal national declaration.

“We’re going to spend a lot of time, a lot of effort and a lot of money on the opioid crisis,” Trump told reporters last month during a different briefing at the New Jersey club.

A drug commission created by Trump and led by New Jersey Gov. Chris Christie has called on the president to declare a national emergency to help deal with the growing crisis.

An initial report from the President’s Commission on Combating Drug Abuse and the Opioid Crisis noted that the approximately 142 deaths each day from drug overdoses mean the death toll from the epidemic is “equal to September 11th every three weeks.”

Christie led a meeting of the commission Wednesday in an office building on the White House grounds. The first lady was in New York and did not attend.

Michael Passante, a member of the panel, said the commission plans to issue its final report by Nov. 1, a month later than originally scheduled.