Megyn Kelly SNAPS over Kavanaugh (not what you think!) - The Horn News 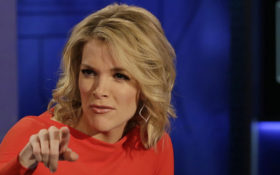 Supreme Court nominee Brett Kavanaugh faces media backlash after unproven accusations that he sexually assaulted a woman in high school surfaced last week — but one controversial figure isn’t having it.

NBC’s Megan Kelly broke her silence on the allegations — and what she said shocked viewers.

On Thursday, Kelly welcomed a panel of guests onto her show to discuss Kavanaugh’s controversy — and slammed his accuser for trying to control when she would testify to the Senate.

The three panel guests on Kelly’s show defended Kavanaugh’s accuser, Christine Blasey Ford, saying that an independent investigation should be launched into the allegations.

Kelly replied to her panel, “This has become a partisan fight; like all the Supreme Court nominations do.”

The liberal host continued the discussion by asserting that Senator Dianne Feinstein is to blame for this major controversy.

Feinstein received a letter from Ford back in July that included the accusations against Kavanaugh, and held it in secret until last week — just days before the confirmation hearing.

Kelly claimed that  Feinstein let the woman down.

“Why didn’t Dianne Feinstein say at least anonymously to Brett Kavanaugh when she met with him one on one and said ‘I’ve received a serious allegation, I need to raise it with you?’” Kelly asked. “She didn’t have to name [Ford].”

NBC’s Stephanie Gosk claimed that the biggest issue for her with this scandal was that Ford’s name was leaked when it was not supposed to be.

The conversation intensified as Kelly chimed in that she blames the Democrats for leaking Ford’s name in the press.

Kelly went on to note, “But the point is, she at this point is refusing to testify at all unless she gets to dictate the process,” adding, “She’s not in charge of the U.S. Senate.”