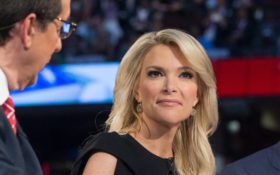 In a desperate bid to jump her ratings, Kelly went back to a reliable source of publicity Monday: Attack President Donald Trump.

Kelly hosted three women that have accused the president of sexually assaulting them in the past. They have provided no evidence for their claims, and Trump has consistently denied the allegations and called the women liars.

But it might be too late to save Kelly’s job.

So bad, Kelly’s show was the worst performing morning show in NBC history in November.

November sweeps – Megyn Kelly set the all time record for lowest ratings, across all demos, in the 9am hour in the history of NBC.

Following the rumors, she has grown desperate to deliver ratings which lead to Kelly to Monday’s stunt. Critics say she was foolish to double-down on her attack against Trump and his supporters.

After the embattled NBC host interviewed three women that had previously accused the president of sexual harassment, users on social media loudly condemned the stunt —

Megyn Kelly is nothing more then a has been, woman scorned, who bows to the liberal playbook of "gotcha" politics.

Megyn Kelly,
You and your employer need to smear Trump but there's nothing left to accuse him of so you're going to re-interview Trump accusers who've already been proven pos liars?
How desperate you must be.

Three women who have accused President Donald Trump of sexual misconduct will appear on Megyn Kelly's NBC News show Monday. They also happen to be the only three people who still watch Megyn Kelly. pic.twitter.com/Guy66FUw9F

Without a big ratings bump, Kelly is in serious trouble.

Insiders are concerned she’ll be cancelled any day now, and her co-stars are increasingly upset that she’s bringing their ratings down too.

Critics have savaged the show and called it unwatchable.

Is there any hope left for her?

You and Elvis may have this in common… [sponsored]

Do you think Megyn Kelly should be fired?