Megyn Kelly to conservatives: Please come back - The Horn News 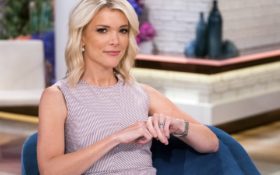 Former Fox News start Megyn Kelly returns with a new show Monday — and she’s desperate for conservatives to forgive her and tune in to “Megyn Kelly Today.”

Kelly signed a massive, $20 million contract with NBC to launch multiple shows on the network last summer, but her ratings have been terrible ever since her nasty clashes with President Donald Trump.

After Kelly’s newsmagazine show Sunday Night with Megyn Kelly was unceremoniously cancelled this summer, experts say this new show could be her last shot at success.

Kelly angered conservatives with her biased reporting during the 2016 election — and it has NBC executives very nervous.

Executives are also pulling out all the stops to set Kelly up for a hit debut. She debuts her talk show at 9:00am EDT, smack in the middle of the four-hour “Today” show block that will funnel her viewers.

It’s this daily talk show, in the lucrative morning market, that will ultimately determine the wisdom of NBC News’ decision to hire Kelly. She promises that “Megyn Kelly Today,” shown live with a studio audience, will be an information-packed hour with a sense of fun.

In fact, she now claims she was never been very political.

“I don’t want to talk about Trump all day,” she said. “In fact, the bar is very high for Trump coverage [on ‘Megyn Kelly Today’]. If you want Trump, you can watch virtually every channel in the country and get Trump non-stop. I think people are looking for a break from that. Not just Trump, it’s inside the Beltway. I don’t want to talk about Mitch McConnell either, or Chuck Schumer or Nancy Pelosi.”

NBC will be closely monitoring how “Megyn Kelly Today” compares to the nondescript third hour of “Today” that preceded her. NBC has been at 2.4 million viewers in the hour, according to the Nielsen company, and wants to improve those ratings.

A few blocks uptown in Manhattan, competitor and veteran Kelly Ripa and Ryan Seacrest’s “Live!” producer Michael Gelman implied that he’s not worried. “I’m not being dismissive, but I don’t really think that much about the competition,” he said.

Television experts say that Kelly’s nasty attacks on Trump have taken a serious toll on her image, and she’s been unable to recover over the past year.

While audiences are much more familiar with her than most people, she’s become a very polarizing figure. Among women — the target audience for “Megyn Kelly Today” — her positive “Q″ score tumbled from 21 two years ago to just 4 this summer, said Marketing Evaluations Inc., a company whose data measures the relative popularity of individual personalities.

The average score for TV hosts is 15, meaning that Kelly is considered extremely unlikable.

While Trump himself has moved on, many of his followers haven’t. The conservative Breitbart news site has Kelly in its sights, with stories in recent weeks saying NBC co-workers were bothered by Kelly’s “diva-like” behavior, and that NBC insiders are in a “total panic” about the show.

Will you be tuning in?