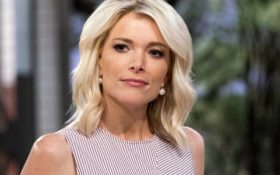 Megyn Kelly couldn’t contain her emotions during her podcast The Megyn Kelly Show on Thursday when she was discussing a family tragedy: the recent death of her sister.

“I gotta tell you that something really sad happened in my family over the weekend,” Kelly said on-air.

“My sister died. She was 58. Her name was Suzanne Crosley, and she died suddenly on Friday of a heart attack.”

She hasn’t been in very good health over the past couple of years. It’s sort of like one problem after another. So it was sudden, and it was unexpected.

I went up, got news of it right after the show, and went right up and was there with my mom and my brother Paul and my nephew Brian, one of her three kids when she passed.

So it was really hard. It was extremely emotional… I’m going back up there after the show today, and she will have her funeral tomorrow.

Kelly spent much of her early life at her family’s homestead in upstate New York. She pre-taped a broadcast to take a day off work for the funeral, but she plans to resume work the following week, as part of her grieving process.

For me, it’s better to be here. Maybe you can relate, but it’s more cathartic to work. It gave me a couple of hours where I coudl take my mind off it it and I could do my job, talk about stuff that matters. It’s not like what we talk about on the show doesn’t matter, not entirely every day, but most days. And — I don’t know — spend some time with my family who I’ve been away from for the past couple of days, Doug and the three kids. And I’ll have more to say about my sister and her life later this week, when I have a chance to process it more.

“You know we can’t all be perfect on that front, but we can make a little effort day by day to, y’know, shoot a text or return a call. I’m never very good at that. So it’s a big reminder to me, just how fleeting things can be — Right? — and how we get ourselves so upset over s**t that doesn’t matter. This is one that does.

Kelly thanked her colleagues for offering sincere condolences. “So many more friends than jerks,” she said.

She gave a special thanks to her mother’s caregiver for keeping her mother company during this sensitive time.

“That’s what it is to be truly a human being and to see another person’s humanity, to step in: self-sacrifice to help another,” Kelly said. “My poor mom! As all moms and dads out there know, this is not the order in which this is supposed to happen. So, in any event, we were all together over the weekend.”

Crosley, Kelly’s sister, is reportedly survived by her children, along with one grandchild.

“Between now and the next time I talk to you live, if you could spare a prayer for my mom and my sister’s kids and my sister’s one grandchild, I would sure appreciate it,” Kelly concluded. “They’re hurting today.”