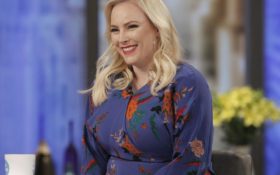 Meghan McCain’s first instinct when approached to join “The View” was to say no — until her father, Sen. John McCain, convinced her to look past her trepidation to see the opportunity.

In less than a year, she’s become a reason to watch ABC’s daytime talk show. McCain brings a feisty spirit to the conservative commentator role where predecessors frequently seemed overmatched and overlooked. She often reflects the views of President Donald Trump’s supporters at a table and city where they are deeply unpopular.

The past few weeks alone, McCain stared down the fury of Whoopi Goldberg to explain her opposition to abortion and labeled Robert De Niro “gross” for his Tony Awards denunciation of Trump. She feuded with a conservative guest who called Trump supporters cult-like, while likening the president to “a pathetic puppy who was completely neutered” for his appearance alongside Russian President Vladimir Putin.

“She is smart, considered and utterly fearless,” said Brian Teta, executive producer of “The View.”

Some bravery is necessary, since McCain’s workplace defines the term “Manhattan liberal.” When a comic warming up the studio audience before a show this month asked how many people were Republicans, he heard one whoop, some stray claps and mostly silence. That was before the panelists came out.

Goldberg so detests Trump she won’t say his name, preferring “the guy in the White House.” The sharp-tongued Joy Behar says she’s offended by Republicans.

The show has spit out previous conservatives. Nicolle Wallace is a hit on MSNBC, but was a bad fit on “The View.” Jedediah Bila lasted a year. Raise your hand if you remember Candace Cameron Bure. Elisabeth Hasselbeck had the most staying power until leaving for the comfort of Fox News.

The 33-year-old McCain heard the stories.

“This is no shade at women who have been here before, but I knew going in that I couldn’t be intimidated by the others and their strong opinions,” she said. “These are all smart, strong women. I had to stay true to my convictions and my politics and not let the physical audience in front of me, which is normally very liberal, or the audience on social media impact my politics. Because a lot of things I say are unpopular.”

Her abortion discussion with Goldberg stepped on the third rail of American politics. “I don’t believe that murder should be legal in the United States of America and I believe abortion is murder,” she said on the air. “It’s really that simple.”

Squabbles with Behar draw the most attention. Seeing them develop is like watching a storm gathering; neither woman has a poker face.

“Was that necessary?” McCain said. “Come on, that was so mean.” She said Behar was making fun of the first lady’s pain.

“You have no sense of humor,” Behar said, giving her co-host a dismissive wave. “That’s your problem.”

When McCain urged her colleagues not to give Trump a blanket condemnation, and instead deal with different topics individually, Behar said, “there aren’t that many years in my life to take him issue by issue.”

A discussion about what the hosts did during a Fourth of July week off exposed their cultural gap. McCain talked about tubing down a creek with her husband and downing Jello shots. Behar, 42 years her senior, didn’t know what a Jello shot was.

The show is clearly sensitive to any perception of personal animus; Goldberg last week referenced media reports that speculate about how people get along by showing a picture of Behar, McCain and co-host Sunny Hostin holding up glasses from a liquid lunch the day before.

Backstage, McCain said she’s developed a kinship with Behar since they’re the show’s most polarizing hosts.

“I like her a lot,” Behar said. “She’s a very intelligent girl. She has qualities in her personality that I admire in myself. For example, she’s very direct. She does not take hostages — she just says it and moves on and I like that about her.”

McCain said she believed that people at “The View” thought she was more moderate than she was, perhaps because she advocates for LGBT rights. She describes herself as a hard-core conservative. Others on the right who once considered her “squishy” now cheer her on, primarily because of the setting. Much like her former colleague Shepard Smith at Fox News Channel, McCain is in the position of delivering contrary points of view to people who don’t often hear them.

McCain and her family are no fans of Trump personally, given swipes at her father that began with a denigration of his POW status in the Vietnam War. She said her toughest day on the show followed reports of a former Trump aide, Kelly Sadler, dismissing Sen. McCain’s opposition to a presidential appointment because he’s “dying anyway” of brain cancer. McCain said that day that “I don’t understand what kind of environment you’re working in when that could be acceptable and you can come into work the next day and still have a job.”

Yet McCain feels that it’s her job to make sure the voices of people who supported Trump are heard.

“I’m trying to explain how we got here,” she said, “because I’m not as surprised about Trump as I think the rest of my cast is … I think he’s going to be re-elected in 2020 easily unless the Democrats wake up to reality.”

It still felt somewhat surreal a few weeks ago when McCain took the side of Trump’s fans in an argument with conservative commentator Tara Setmayer. McCain blew up at her for making reference to a “cult” of people who blindly follow Trump no matter what he says, suggesting that’s disrespectful to the president’s supporters

A bemused Behar loved it. “I enjoy Republican on Republican crime,” she quipped.

Not one of McCain’s finest shows, she came off as a bully. Setmayer didn’t return messages seeking comment.

Two of McCain’s most memorable moments of the past year had nothing to do with political fights. Her takedown of “Fire & Fury” author Michael Wolff was well-researched and appeared to take him by surprise, given his initial dismissive attitude toward her. McCain couldn’t hold back tears when former Vice President Joe Biden talked about his son’s death from the same brain cancer that McCain’s father has. Biden held her hand to comfort her.

McCain said her father watches her every day on “The View,” one way to remain close when he’s miles away in Arizona.

She’s glad she took his advice.

“My dad always says that a fight not joined is a fight not enjoyed, and I feel that way,” she said. “I like the debate, and these are amazing adversaries to have every morning. That’s fun.”