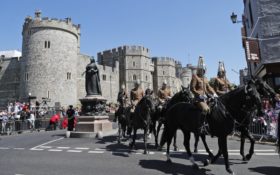 Ending days of speculation, Meghan Markle said Thursday that her father will not be able to attend her wedding to Prince Harry due to health problems. The news came as British military personnel rehearsed for a gala procession through Windsor that will follow Saturday’s ceremony, which will be televised live around the world.

“Sadly, my father will not be attending our wedding,” Markle said in a statement released by Kensington Palace. “I have always cared for my father and hope he can be given the space he needs to focus on his health.”

The palace has not revealed any details about Thomas Markle’s health issues, but the celebrity website TMZ says the 73-year-old retired Hollywood cinematographer is hospitalized in California after undergoing a procedure to clear blocked coronary arteries.

He reportedly told the website he was OK after three stents had been inserted, but needed to rest.

Thomas Markle had been scheduled to walk his daughter down the aisle when she weds her prince Saturday in St. George’s Chapel at Windsor Castle.

It’s possible that Doria Ragland, the bride’s mother, could fill that role instead. No replacement has been officially named. Meghan Markle may also choose to walk down the aisle by herself.

Harry and Markle, who had remained out of the public eye in recent days, were spotted being driven onto the grounds of Windsor Castle on Thursday afternoon.

Britain’s Press Association indicated they are expected to have tea with Queen Elizabeth II and may be joined by Ragland. No details about the meeting were officially released.

On the streets of Windsor, military personnel rehearsed their procession through the town, watched by thousands of enthusiastic royal fans.

The wedding day festivities will include a 25-minute carriage ride outside the grounds of Windsor Castle by the newlyweds after the ceremony. More than 2,600 members of the public have been invited onto the castle grounds to watch the procession.

Thursday’s practice session aimed to work out the precise timings of Saturday’s procession. The British pride themselves on carrying off complex parades with aplomb, and it would not do for the couple to arrive at their wedding reception even a few minutes late.

“It’s very important to have a dress rehearsal, for everyone involved. It gives the guys a sense of timings for the day, how fast they need to move, how slow they need to move. It also helps the horses themselves, showing them the environment of where they are,” said Adam Blackmore-Heale, a member of the Household Cavalry.

A large military contingent is taking part in the procession, reflecting Harry’s years of military service, including tours in Afghanistan. Their presence in the rehearsal Thursday gave crowds and TV viewers a taste of what the wedding procession will look like.

The church service will be conducted by the Rev. David Conner, the dean of Windsor. He said Thursday that Harry and Markle are deeply committed to each other.

“They’re very serious about their relationship and that’s why I think they particularly want to see it grounded in a religious ceremony, in a Christian ceremony,” he said.

Markle’s mother Ragland — who arrived in Britain carrying a Burberry suit bag, a possible clue to her wedding outfit — will meet with Harry’s father Prince Charles and his wife Camilla, Harry’s brother Prince William and his wife Kate, and other members of the royal family that her daughter will officially join Saturday.

Doubts about whether Markle’s father would come to the wedding surfaced earlier in the week when TMZ reported he would not come because he was embarrassed by reports that he had staged photos showing him being measured for his wedding suit. That story also included a report that he had suffered a recent heart attack.

The drama surrounding Thomas Markle, and harsh comments about the bride made by estranged members of her extended family who were not invited to the wedding, have increasingly dominated British tabloid coverage of the royal wedding.

“Even the most cursory internet search would have thrown up a few red flags,” she said. “Could they not have taken at least a few steps to get them on-side?”