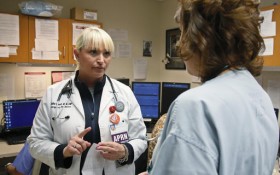 Despite bitter resistance in Oklahoma for years to President Barack Obama’s health care overhaul, Republican leaders in this conservative state are now confronting something that alarms them even more: a huge $1.3 billion hole in the budget that threatens to do widespread damage to the state’s health care system.

So, in what would be the grandest about-face among rightward leaning states, Oklahoma is now moving toward a plan to expand its Medicaid program to bring in billions of federal dollars from President Obama’s new health care system.

What’s more, GOP leaders are considering a tax hike to cover the state’s share of the costs.

“We’re to the point where the provider rates are going to be cut so much that providers won’t be able to survive, particularly the nursing homes,” said Republican state Rep. Doug Cox, referring to possible cuts in state funds for indigent care that could cause some hospitals and nursing homes to close.

Despite furious opposition by conservative groups, Republican Gov. Mary Fallin and some GOP legislative leaders are pushing the plan, and support appears to be growing in the overwhelmingly Republican Legislature. Details have not been ironed out but the proposal is based on an Indiana program that received federal approval.

President Obama called on states to expand their Medicaid insurance for low-income residents as part of his 2014 health overhaul designed to shrink the population of uninsured Americans. Most Democratic-led states did so, along with a handful of GOP states.

But in Oklahoma, even with 20 percent of its population on Medicaid, it’s been no way, no how. Until now.

A bust in the oil patch has decimated state revenues, compounded by years of income tax cuts and growing corporate subsidies intended to make the state more business-friendly.

Oklahoma’s Medicaid agency has warned doctors and other health care providers of cuts of up to 25 percent in what the state pays under Medicaid.

“We are nearing a colossal collapse of our health care system in Oklahoma,” warned Craig Jones, the president of the Oklahoma Hospital Association, which represents more than 135 hospitals and health care systems in the state. “We have doctors turning away patients. We have people with mental illnesses who are going without treatment. Hospitals are closing, and this is only going to get worse this summer if the Legislature does not act immediately to turn this around.”

In the poverty-wracked southeastern corner of the state, where 96 percent of babies in the McCurtain Memorial Hospital are born to Medicaid patients, most health care would end, said hospital CEO Jahni Tapley.

Nursing homes have been warning residents that they may be closing. Asked where she would go if the Beadles Nursing Home in the small town of Alva closes, Jeanie Yohn, 89, said: “I just can’t imagine. I have three daughters, but they don’t live here.”

Under the proposal, which would be funded in part with a $1.50-per-pack tax on cigarettes, Oklahoma would shift 175,000 people from its Medicaid rolls onto the federal health exchange created by the Affordable Care Act. That would make room for adding to Medicaid roughly the same number of working poor who are currently uninsured. Participants would pay nominal premiums and co-pays.

Fallin, a former congresswoman who voted against Obama’s health plan when it came before the House, argues that the plan doesn’t amount to expanding Medicaid because the program’s rolls don’t grow. Rather, she said, it “transitions 175,000 Medicaid enrollees to the private insurance market.”

No matter what state leaders call it, conservative groups aren’t happy about the idea of more government health spending.

“They can call it Medicaid rebalancing, but there’s only one federal program that offers a 9-to-1 federal match, and that’s Obamacare,” said Johnathan Small, president of Oklahoma Council on Public Affairs, a free-market think-tank that opposes higher taxes. The opponents have called for covering health costs by cutting spending for less essential programs.

Americans for Prosperity, another conservative think-tank backed by the billionaire philanthropist Koch brothers, David and Charles, also has launched a campaign against the proposal and is hosting a “NobamaCare” event at the state Capitol to voice their opposition.