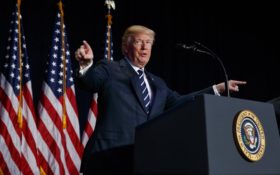 President Donald Trump will propose lowering prescription drug costs for Medicare beneficiaries by allowing them to share in rebates that drug companies pay to insurers and middlemen, an administration official said.

A senior administration official outlined the plan Thursday on condition of anonymity ahead of the release of Trump’s 2019 budget plan next week.

Pharmaceutical companies now pay rebates to insurers and pharmacy benefit managers to help their medications gain a bigger slice of the market.

Under Trump’s proposal, seniors covered by Medicare’s popular “Part D” prescription benefit would be able to share in the rebates for individual drugs that they purchase at the pharmacy.

Trump’s budget would also expand Medicare’s “catastrophic” drug benefit so that many seniors with very high costs would not face copayments. Seniors with high drug bills are currently still responsible for 5 percent of the cost of their medications. With some new drugs costing $100,000 a year or more, patient costs add up quickly.

The White House proposal would put Trump in the middle of a tug-of-war between drug companies on one side and insurers and pharmacy benefit managers on the other, with billions of dollars at stake.

Insurers and pharmacy benefit managers say the reason drug costs are so high is that drug companies are free to charge what the market will bear.

The pharmaceutical industry says middlemen are the problem, because they keep rebates paid by drug makers instead of passing them on to patients. Insurers counter that rebates are passed on in the form of lower monthly premiums for everybody.

The drug industry lobbying group, Pharmaceutical Research and Manufacturers of America, had no immediate reaction.

The Trump administration’s new proposals come on top of a long list of Medicare changes in the congressional budget deal. Medicare is the government’s premier health insurance program, covering about 60 million seniors and disabled people.

Lawmakers would shift a greater share of Medicare drug costs to the pharmaceutical industry. They also want to eliminate the drug coverage gap known as the “doughnut hole” one year earlier than currently scheduled, in 2019 instead of 2020.

“On the whole, I think this is a good bill for people with Medicare,” said Joe Baker, president of the Medicare Rights Center, said of the congressional legislation. “This tilts toward getting a lot of good things done.”

But his group opposes a provision that would raise premiums paid by the wealthiest retirees for coverage of outpatient services and prescription drugs.

Here’s a look at some of the major Medicare provisions in the budget deal that Republican leaders are trying to push through Congress. Democrats are split over the overall measure, but the Medicare provisions appear to have support from both parties:

Originally, beneficiaries in the “doughnut hole” coverage gap were responsible for the full cost of their medications, but the Affordable Care Act passed under former President Barack Obama gradually closes the gap. The budget deal accelerates the timetable by one year, to 2019.

Drug makers are already required to provide discounts to close the coverage gap, but the budget deal raises the level of company discounts, which in turn lowers the government’s costs. That should act as a brake on the monthly premiums paid by beneficiaries.

“In theory when Medicare spending goes down, premiums would go down, too,” said Tricia Neuman, a Medicare expert with the nonpartisan Kaiser Family Foundation.

The drug industry is criticizing the proposal, saying it will mainly benefit insurance companies that act as middlemen providing the benefit.

In previous years, Congress had routinely held off on applying the caps. Groups including AARP were pressing for a full repeal. It takes effect this year.

Premiums for outpatient coverage and prescription drugs would rise for about 1 million wealthy seniors with annual incomes of at least $500,000 for an individual, or $750,000 for a couple filing jointly.

Hiking premiums on the well-to-do is an idea that has bipartisan support among lawmakers, but advocates worry that Congress will ultimately start raising costs for middle-class seniors as well.

The budget deal expands Medicare’s ability to pay for telemedicine in a wide variety of situations, including for patients with stroke symptoms.

It also incorporates a bipartisan Senate bill that is intended to improve care coordination for patients with chronic illnesses, such as heart disease, cancer, and diabetes.

The deal would repeal the Independent Payment Advisory Board, a Medicare cost-control agency authorized under the Affordable Care Act. It was controversial from the beginning, and the Obama White House did not move forward to set up the board.