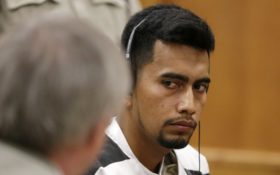 The Iowa college student who was allegedly abducted by a stranger while running last month in a small town died from stab wounds, a medical examiner says.

Authorities announced Thursday that preliminary autopsy results from the state medical examiner’s office show 20-year-old Mollie Tibbetts was the victim of a homicide who died from “multiple sharp force injuries.”

State medical examiner Dennis Klein said in an interview that the finding means a sharp-edged or pointed object such as a knife was used to attack Tibbetts. He declined comment on the details of her injuries, and said that his office would hire consultants, including forensic anthropologists, to analyze her remains further and make additional findings.

The man charged with first-degree murder in Tibbetts’ death, Cristhian Bahena Rivera, allegedly led investigators to her body early Tuesday in a cornfield outside of Brooklyn, Iowa, the town where the University of Iowa psychology major was last seen one month prior. While investigators were confident then that the body was that of Tibbetts, the autopsy definitively confirmed her identity.

Prosecutors allege that Rivera abducted Tibbetts while she was out for an evening run in Brooklyn on July 18, killed her and disposed of her body in the secluded location.

A criminal complaint alleges that Rivera confessed during a lengthy interrogation that began Monday to following Tibbetts in his car, getting out on foot and chasing after her. Rivera told investigators that he panicked after Tibbetts threatened to call police on her cellphone, he blacked out and later came to when he was unloading her bloody body from the trunk of a car, it says.

Rivera worked for the last four years at a dairy farm a few miles from where Tibbetts was last seen. He and Tibbetts have no known connections other than that Rivera allegedly told investigators that he saw her running previously. Investigators zeroed in on him as the suspect after obtaining footage from surveillance cameras showing a vehicle connected to him circling the area of Tibbetts’ running route.

Earlier this week, investigators said they were uncertain how Tibbetts was killed or whether she was sexually assaulted. They’ve made no mention of recovering a knife or other weapon linked to the death.

Rivera, a native of Mexico who is suspected of being in the U.S. illegally, made his initial court appearance Wednesday and is being jailed on a $5 million cash-only bond. He faces life in prison without the possibility of parole if convicted.

Within hours of the arrest, President Donald Trump seized on the news that Rivera was allegedly in the country illegally to call for stricter immigration laws. And in an interview that aired Thursday, he said on “Fox & Friends” that Tibbetts was a “beautiful young girl” killed by a “horrible person that came in from Mexico, illegally here.”

The president also said the suspect was “found by” agents from Immigrations and Customs Enforcement, an agency that some liberals have called for abolishing because of tactics they view as overly harsh. An ICE spokesman said Thursday that its agents worked with state and local investigators in “identifying, locating and interviewing the suspect.”

Rivera’s defense attorney, Allan Richards, has denounced Trump for prejudging his client’s guilt, saying the president’s comments would make it hard for Rivera to get a fair trial.

“Let’s let the process go,” he said Thursday. “The process is about truth-finding in a rational, peaceful and efficient manner. We’re only at the very preliminary stages.”