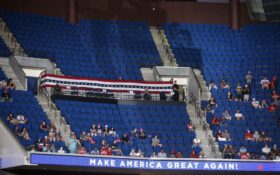 President Donald Trump’s return to the campaign trail on Saturday was a disappointment. His weekend rally in Oklahoma had lower-than-expected turnout. Tens of thousands were originally expected.

Only 6,000-12,000 braved potentially violent protesters and the global pandemic to come out, and the mainstream media quickly pounced.

CNN said the rally proved Trump’s campaign has gone from “bad to worse.” Vox said it “did not go well” and The New York Times heaped praise on foreign teens that claimed they “pranked” the rally and were behind the disappointing turnout.

Pictures of a tired-looking Trump returning at 1:00 a.m. to the White House went viral on social media.

But there’s one important fact they’re ignoring — the smashing online success of the rally.

Mercedes Schlapp, a senior adviser to the Trump campaign, told Fox News’ Chris Wallace on Sunday that protesters, violence, and lingering coronavirus concerns were behind the disappointing turnout.

“Let me explain when it comes to understanding how the rallies work, it’s a first-come, first-served basis,” Mercedes Schlapp, a senior adviser to the Trump campaign, told Fox News’ Chris Wallace on Sunday. “Basically, what the one million RSVPs include, it’s an opportunity for us to gather data, to get information, obviously.

“So, the key here that is important is to understand … [voters] were concerned about the protesters who were coming in,” Schlapp said. She noted her own family that lives near Tulsa declined to attend because of safety concerns.

“But let me make this clear: Joe Biden has an event with empty folding chairs and painted circles on the floor. I’d love to see a Joe Biden rally. Let’s bring it on, because there is no comparison.”

“Mercedes, please don’t filibuster,” Wallace replied to Schlapp in the contentious back-and-forth. “We’re showing pictures here of empty areas. Frankly, it makes you guys look silly when you deny the reality of what happened.”

Schlapp said protesters tried to block entrances to the venue, and were engaged in other acts of violence. Wallace denied that.

“We saw that had an impact in terms of people coming to the rally,” Schlapp said. “But what was amazing, Chris, is the fact that over 5.3 million people watched it on all of our digital media channels, and so the reach was far and wide.”

It’s unclear when Trump will hold his next rally.

Before Oklahoma, the campaign had planned to finalize and announce its next rally this week. Trump is already scheduled to make appearances Tuesday in Arizona and Thursday in Wisconsin. Both are major general election battlegrounds.

At least one swing state’s Democratic governor, meanwhile, said Trump would not be welcome to host a rally in her state

Gov. Gretchen Whitmer warned she would try to block Trump from hosting a rally in Michigan.

Biden’s campaign, meanwhile, seized on a fresh opportunity to poke at the incumbent president, suggesting that Trump “was already in a tailspin” because of his mismanagement of the pandemic and civil rights protests.

“Donald Trump has abdicated leadership, and it is no surprise that his supporters have responded by abandoning him,” Biden spokesperson Andrew Bates told The Associated Press.