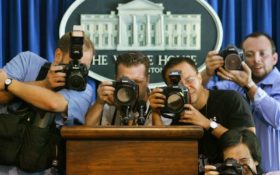 The mainstream media is in deep trouble – and it’s going to get worse. From sea to shining sea, Americans are increasingly fed up with the liberal spin and “fake news” coming out of corporate media sources.

And despite the liberal braying and complaining, voters trust President Donald Trump far more than the 24-hour media spin machine that is attacking him.

That’s according to a recently released Emerson College Poll, which found that “voters find the Trump administration to be more truthful than the news media.”

More Americans trust Trump than don’t trust him, the ECP data shows. “Meanwhile, the news media is considered untruthful by a 53%-majority of registered voters, to only 39% who find them truthful (a 14-point gap).”

Still don’t think there’s a liberal spin? Consider this: “69% of Democrats find the news media truthful, while a whopping 91% of Republicans consider them untruthful.”

Doesn’t that deep divide prove there’s a liberal leaning to the media?

Independents and swing voters think so, and report their trust/distrust of the media “by a margin of 45%/47%.”