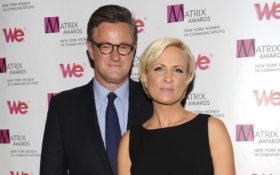 The mainstream media has been attacking conservatives for decades. Wednesday, when President Donald Trump dished out some nasty attacks of his own, the media had a full-blown meltdown.

Looks like the liberal media is willing to give it, but can’t take it.

“Morning Joe” hosts Joe Scarborough and Mika Brzezinski said Friday that Trump lied about their December encounter in a tweet and that he has an “unhealthy obsession” with their program, implying he was mentally unwell.

For their part, the hosts admitted they had known Trump for more than a decade and have “fond memories” of their relationship. They also admitted they were at Trump’s Mar-a-Lago estate in Florida shortly before the New Year in December to ask Trump for an interview, and confessed that Brzezinski “did have a little skin under her chin tweaked.”

So who is really obsessed?

Friday, the two MSNBC personalities announced they had immediately postponed their vacation in order to respond to Trump’s tweet, and devoted almost their entire show — and a column in The Washington Post — to a hysterical response.

MSNBC panelist Donnie Deutsch was first on-air at 6 a.m., and hour before “Morning Joe” started. Deutsch rushed to his colleagues defense and called the president “a vulgar human being.”

Taking to the air right after, Scarborough and Brzezinski immediately went on a full-blown attack.

Scarborough said Trump “attacks women because he fears women,” and according to Fox News, “the two co-hosts played armchair psychologist, alluding to Trump’s checkered history in making controversial remarks about women and saying those incidents may reveal something greater about the president.”

“He appears to have a fragile, impetuous, childlike ego that we’ve seen over and over again,” Brzezinski said, without a hint of irony. “Especially with women. It’s like he can’t take it!”

Their program and Trump have had a tortured relationship. After being criticized by other mainstream media outlets for being too soft on Trump during the campaign, the two have turned sharply against him. Brzezinski in recent weeks has wondered whether Trump was mentally ill and said the country under his presidency feels “like a developing dictatorship.”

Trump on Thursday had launched a Twitter attack on the brains, looks and temperament of Brzezinski, drawing howls of outrage from the media.

…to Mar-a-Lago 3 nights in a row around New Year's Eve, and insisted on joining me. She was bleeding badly from a face-lift. I said no!

Responding to Trump’s insult, Brzezinski responded on Twitter by posting a photograph of a Cheerios box that included the phrase “made for little hands.” People looking to get under the president’s skin have long suggested that his hands appear small for his large frame.

Trump’s allies cast his outburst as positive, an example of his refusal to be bullied.

White House spokeswoman Sarah Huckabee Sanders said the president was “pushing back against people who have attacked him day after day after day. Where is the outrage on that?”

“The American people elected a fighter; they didn’t elect somebody to sit back and do nothing,” she added.

First lady Melania Trump, who has vowed to fight cyberbullying while her husband is president, gave his tweets a pass.

“As the first lady has stated publicly in the past, when her husband gets attacked, he will punch back 10 times harder,” her communications director, Stephanie Grisham, said in a statement.

The White House has shown increasing irritation over harsh coverage of the president on Brzezinski and Scarborough’s “Morning Joe.”

When the administration finally fires back, it’s clear the media can’t take what it’s dishing out.