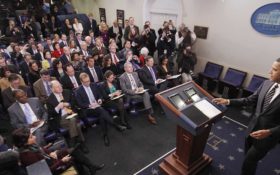 President of the Project Veritas foundation, James O’Keefe, just hinted at a major leak to come — and it could destroy fake news for good.

While Trump supporters cheered on the president for standing up to the biased media, the liberal spin machine remained consistent with their anti-Trump angle. Critics were outraged at the “madness” of the press conference, which Trump identified as more fake news.

Thank you for all of the nice statements on the Press Conference yesterday. Rush Limbaugh said one of greatest ever. Fake media not happy!

While reporters’ bias against Trump is widely speculated, some still claim there isn’t enough proof to fully discredit the “fake news”… yet.

O’Keefe tweeted a sneak peak of his next video late Thursday, and conservatives everywhere are on the edge of their seats.

Trump’s accusations of fake news are huge enough… but what if we FINALLY heard it coming straight from the reporters’ mouths?

That is what could be coming soon from Project Veritas, which O’Keefe alluded to in further tweets.

When one twitter user asked him if it was a leak, he responded:

Another twitter user tweeted to O’Keefe, “Maybe CNN?” to which he responded:

The first video revealed Hillary Clinton’s campaign was working with Super PAC’s to incite violence at Trump rallies, and make it appear that it was caused by Trump supporters.

In the second video, O’Keefe shows undercover video of Democratic party operatives bragging the voter fraud that they helped happen. Scott Foval, A Super PAC director, admits to bussing people in to vote and using money and action to “manipulate the vote.”

The third and final video proves Hillary Clinton was illegally communicating with the DNC and various Super PAC’s during her presidential run.

It’s safe to assume that this next Project Veritas video will be a major bombshell, and could take down the liberal biased media for good.