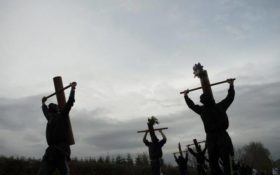 The mainstream media is absolutely fixated on Muslim refugees, and there’s no doubt many are in desperate need of help.

But there’s another group being massacred throughout the Middle East and Africa entirely because of their faith – and there’s been dead silence from that same media.

Could the reason be that these helpless victims are Christians?

A new report finds a Christian is killed EVERY SIX MINUTES — and these aren’t random victims of wars, and they’re not simply people in the wrong place at the wrong time.

They’re being slaughtered for their faith.

The new report from the Center for Studies on New Religions (CESNUR) finds an average of 90,000 Christians have been killed every year over the last decade, or 900,000 – nearly a MILLION – murdered over that period.

The organization said Christians are targeted for two reasons.

“First because their proclamation of peace disturbs more belligerent groups,” the group’s founder, Dr. Massimo Introvigne, told Breitbart News. “And second, because their social teachings on life, family and poverty are opposed by powerful forces.”

Peace, family and charity are apparently values many in the world – especially the Muslim world – find threatening.

“Without wishing to forget or belittle the suffering of members of other religions, Christians are the most persecuted religious group in the world,” he told Vatican Radio.

His organization said about 70 percent of the deaths take place in Africa, where Muslim groups such as Boko Haram have waged a campaign of terror and fear against Christians.

Others are murdered in the Middle East, North Korea, and even in Europe.

Some of these horrific killings do make headlines, like the brutal assault on a Christmas market in Germany where 11 innocents where killed and 48 wounded by a Muslim terrorist and ISIS sympathizer.

But most of the attacks get no media attention at all, like the Christian village in Nigeria wiped out in October. The attack on Godogodo left 48 dead and 326 wounded.

And that was just one incident in the country.

Over the last three months of the year, there were dozens of others, just as deadly.

Elsewhere, 30 Christians were hacked to death by Muslim terrorists in the Central African Republic in a single attack in October.

And earlier in the year, a suicide bomber in Pakistan killed 78 Christians at an Easter celebration.

It continues to happen; already this year, a Christian businessman in Egypt had his throat slashed for the “crime” of selling alcohol (which is legal, but restricted in the country).

“Sadly, this trend has been continuing upward for the past several years,” Emily Fuentes, communications director of the Open Doors organization, told the Christian Post. “So it is likely going to continue rising, especially with the spread of ISIS and other extremist groups throughout Africa, Central Asia, the Middle East and Southeast Asia.”