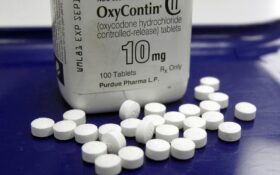 The top executive for global consulting firm McKinsey & Company faced congressional questions Wednesday about the company’s work for U.S. health regulators even as it advised opioid drugmakers on how to boost sales of their prescription painkillers.

The hearing before a House committee is part of an ongoing investigation into McKinsey’s role in the U.S. opioid crisis that has been linked to over 500,000 overdose deaths from both prescription pain medications and illicit drugs like fentanyl.

Last year the consulting powerhouse agreed to pay $600 million to settle lawsuits over its work advising opioid makers, though it admitted no wrongdoing.

Members of the House Oversight and Reform Committee are questioning McKinsey’s top managing partner, Bob Sternfels, about revelations that the company allowed consultants working for OxyContin-maker Purdue Pharma to simultaneously advise the Food and Drug Administration, the agency tasked with overseeing drug safety.

A preliminary report from the committee found 22 McKinsey consultants who worked for both the FDA and an opioid manufacturer over the span of a decade. The overlapping work included McKinsey staffers advising the FDA on overhauling its approach to drug safety, according to the committee’s review of thousands of company documents.

“McKinsey was advising both the fox and the hen-house — and getting paid by both,” said Chairwoman Rep. Carolyn Maloney, D-N.Y. ”Clearly, McKinsey should not be setting strategy for both drug companies and the FDA.”

Sternfels told the committee that McKinsey’s FDA contracts focused on “organizational support,” and did not pertain to opioids or drug “safety standards.” He also pointed to multiple examples where McKinsey disclosed its work for opioid drugmakers to the FDA.

Congressional investigators found examples of McKinsey touting its FDA connections when soliciting consulting business from drugmakers. The company also submitted advice on dealing with the opioid epidemic to members of the Trump administration, including former Health and Human Services Secretary Alex Azar, according to the report. It’s unclear if the information had any effect on federal policy.

For decades McKinsey has been the preeminent corporate consulting firm, advising many of the world’s biggest companies on strategy and operations. The company has also made inroads into government consulting, receiving nearly $1 billion in federal contracts.

The Oversight Committee scrutinized McKinsey’s work on three dozen FDA contracts worth more than $65 million, stretching from 2008 to 2021.

At a separate Senate hearing Tuesday, the head of FDA’s drug center director told lawmakers McKinsey’s work was about “organizational design and did not entail involvement in product regulation.” The agency currently has no contracts with McKinsey, she noted.

The House report did not conclude that McKinsey’s FDA consulting resulted in lighter regulation of OxyContin or any other opioids.

For years the FDA has attempted to discourage doctors from overprescribing the drugs, mainly by adding starker warnings to their labeling. Prescriptions have fallen from their peak in 2012, but mainly due to new prescribing limits imposed by state and local governments, insurers and hospital systems.

Since announcing the $600 million opioid settlement McKinsey says it has overhauled how it vets clients and no longer consults for opioid drugmakers.