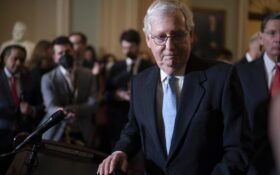 Now, McConnell appears to have changed his tune. He spoke on Monday about his “great confidence” in underdog candidate Dr. Mehmet Oz of Pennsylvania.

“I have great confidence,” McConnell told reporters in Kentucky, according to The Hill. “I think Oz has a great shot at winning.”

Three days before, McConnell had hosted a fundraiser for some Senate candidates — not only Oz, but also Georgia’s Herschel Walker and North Carolina’s Tedd Budd.

McConnell referred to the fundraiser when speaking to reporters about his faith in Oz.

“I don’t think I would have had him here if I didn’t think that,” McConnell told reporters Monday, according to The Hill.

“I pick out three of our candidates every summer that I think have the best shot at winning and invite them and I picked these three because I thought they were in critical states and had a good chance of winning.”

Oz and Budd are running for vacant seats, while Walker is running against an incumbent.

In FiveThirtyEight’s poll average, Oz is currently trailing nine points behind the Democrats’ candidate, Pennsylvania Lt. Gov. John Fetterman. However, neither candidate is polling at more than 50 percent.

Fetterman outraised Oz by more than $8 million in the second quarter, according to disclosure forms obtained by ABC 27 Pennsylvania.

Oz started fundraising later than Fetterman, due to a protracted recount in the Republican primary. He has also been funding his own campaign, according to the disclosure forms.

In November 2021, McConnell told reporters outside a Kentucky hospital, “I think the fall of ’22 is likely to be a very good election for Republicans.” The Republican leader specifically cited the GOP’s surprise victories in New Jersey’s state senate and Virginia’s race for governor.

Flashback: Trump hits back at McConnell over ‘candidate quality’