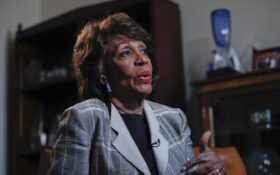 In the middle of a heated debate between Rep. Jim Jordan, R-Ohio, and Dr. Anthony Fauci on the House floor, Waters came unglued — and the explosive moment quickly went viral.

Jordan, one of former President Donald Trump’s loyal impeachment defenders, had been grilling Dr. Fauci on the House floor over COVID-19 restrictions.

“Shut your mouth!”  she yelled at Jordan.

The confrontation began when Jordan applied pressure on Fauci over the exact timeline on when economic restrictions would begin to ease.

Jordan and other top Republicans have been pressing Fauci over his advice related to COVID-19 mitigation such as social distancing, mask-wearing, and the reopening of businesses and schools.

Americans are desperate to get back to normalcy, and Jordan demanded a timeline from the nation’s top infection expert.

“You don’t think Americans’ liberties have been threatened in the last year, Dr. Fauci?” Jordan asked the doctor.

“This will end,” Dr. Fauci said, “for sure — when we get the level of infection low.”

Jordan responded by asking when exactly that would be, and the two became heated according to reports.

“What is low enough, give me a number?” Jordan asked.

House Coronavirus Crisis Subcommittee Chair Rep. Jim Clyburn then interjected in the conversation. “I’ll tell you an instance of when we can get our liberties back: It is when 90% of the members of Congress get vaccinated,” Clyburn said.

“Is it 90 percent, Dr. Fauci? That’s what I’d like to know,” Jordan said. “Give us some objective standards versus ‘when certain things get reached we might be able to get back to having our liberty’ — when? What’re the numbers?”

That’s when Clyburn acknowledged Rep. Waters to speak. “Thank you for recognizing me, Mr. Clyburn,”  Waters said. And she repeated, “reclaiming my time,” as Jordan continued to talk and they shouted over each other until Waters erupted.

“Your time expired sir,” she yelled. “You need to respect the chair and shut your mouth!”

Jim Jordan's questioning of Dr. Fauci devolves into a shouting match among several committee members, eventually resulting in Maxine Waters yelling: "You need to respect the chair and shut your mouth!" pic.twitter.com/Phzr4DCGmM