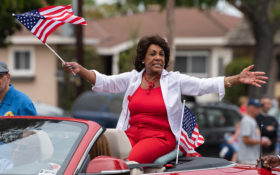 Waters thought the American people would rally behind her call for impeaching the president.

But most of the Americans are sick of her nonsense — and they’re turning on Americans.

Even liberal pollsters say Waters is leading Democrats over the cliff.

According to FiveThirtyEight, most voters in the U.S. are sick of the impeachment threats against President Donald Trump.

Overall, this creates a potentially disastrous tilt for Democrats.

Overall, 53 percent of voters say Trump shouldn’t be impeached. Only 39 percent say that he should be… and most of those are already loyal Democratic voters.

The critical support of independent, swing voters are sick of Maxine Waters’ demand for impeachment. Not only do the numbers bode badly for her, but they’re also going to play a part in damaging the unity of the Democrats — and with frontrunner Joe Biden poised to take on Trump, it could turn away key voters in the 2020 general election.

Moderates in the party have been under pressure from radical left hardliners for quite some time. These moderate voters, fed up with the increasingly unhinged far-left, will end up jumping ship to the GOP.

An independent voter swing over impeachment would only strengthen the Republican party and destabilize the Democrats. Even rank and file leaders like House Speaker Nancy Pelosi, D-Calif., and Senate Minority Leader Chuck Schumer, D-N.Y., are pushing the party so far left, they’re becoming unelectable.

Maxine Waters’ dream of removing Trump from the oval office is a nightmare for voters.

And it will cost Biden the White House he’s always wanted.