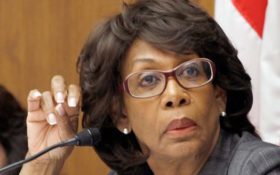 Rep. Maxine Waters, D-Calif., is having a tough time in her role as House Financial Services chairwoman — and on Wednesday, she got humiliating news just moments before she was set to introduce a proposal she’d been working on for weeks.

Waters’ own caucus forced the liberal lawmaker to back down in what Politico called the biggest blow yet to her leadership role on the powerful committee.

The same day Waters was set to introduce a bipartisan Export-Import (Ex-Im) Bank bill, a sudden backlash from Democrats forced her to quietly shelve the proposal.

The California Democrat informed members of her committee that she wouldn’t move ahead with a vote this week on the new legislation because of their criticism. Waters had negotiated the bill with Rep. Patrick McHenry, R-N.C., which was intended to reauthorize the Ex-Im bank that provides loan guarantees to foreign buyers of U.S. goods.

Stunningly, Waters failed to give her fellow Democrats enough say in the revived bank bill, critics said. She reportedly expected her fellow caucus members to vote the way she told them — and was surprised by the pushback.

“Uniting the disgruntled members was frustration that Waters negotiated the bill and expected Democrats to fall in line behind it without more of their input,” Politico reported. “By Wednesday morning, labor and environmental advocates were challenging the bill, while business groups refrained from taking public positions.”

Waters said she’d try to renegotiate the bill after her defeat. Democrats objected to language in the bill that would have limited U.S. government loans to “bad actors” in China.

“We have a consensus that everyone wants to see Ex-Im reauthorized,” Waters said when she announced the delay. “I am not giving up. And I am asking Mr. McHenry not to give up.”

McHenry expressed frustration with the delay.

Other conservative lawmakers expressed doubt the bill could be rewritten in a way to satisfy Democrats, while also making it through the Republican-controlled Senate.

“McHenry did a great job — even with us critics and skeptics — of keeping everybody read into what was going on. This is my third or fourth go-around on reauthorization and my frustration has been that oftentimes, the reforms that were touted really weren’t reforms,” Rep. Bill Huizenga, R-Mich., an Ex-Im bank skeptic, told The Hill.

“I do believe that there were some significant reforms that were put in place here.”

“If it becomes a completely rewritten bill that [Waters] almost starts over with, I’ve got some real amendments with some real reforms that I want people on the record for,” Huizenga said.