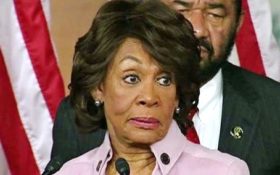 Rep. Maxine Waters, D-Calif., is notorious around Washington, D.C. for her lack of ethics. For years, Waters has been accused of corruption for getting rich off dirty money. The California Democrat has been named one of the Most Corrupt Persons in Congress five times during her career.

How low will she sink? A new video caught on Waters on camera demanding money from a homeless woman in her district.

Waters visited Skid Row in Los Angeles last Friday and bought a book from a homeless sidewalk vendor — but the multi-millionaire Waters made sure the woman didn’t make off with her change.

She made sure to let her staff know the homeless woman owed Waters $10.

Waters was in the area as a publicity stunt to raise attention to a $13 billion House bill known as the “Ending Homelessness Act.”

In other words, Waters wants your money — but not $10 of hers — going to her district.

“I’ve got a big bill, it’s HR-1856, $13 billion. We’re working really hard,” Waters told a woman at the beginning of the video. “So do everything that you can do… keep talking it up, keep telling everybody, to get the message out.”

“I put all these tents here, with my own money,” Williams said. “Free sewing for the community. I do high-blood pressure readings. I give shade … and a place to sit. And I did it because of police brutality broke my leg in 2013 and I couldn’t make it home,.”

“So I’m fighting against police brutality,” Williams said. “This is my tent. This is my cabinet that I put here. And while I’m fighting, I give back to the community and I sew.”

Moments later, Waters posed with Williams and a book she purchased from the woman’s makeshift bookstore.

But Waters had already forgotten the woman’s name.

“I’m Maxine Waters and I’m here with… I’m with,” Waters said, pointing to Williams to cue her to identify herself.

“Stephanie Arnold Williams,” Williams said. Waters repeated her name and once again praised her charity work while waving around a $20 bill for a photo.

“She’s so creative. She set up a really nice environment here, but she’s got all these educational books,” Waters said. “And guess what? I bought this Langston Hughes book for $10.”

“I need my change,” she quickly reminded her staffers.

“The video of the exchange, posted to YouTube by Michael Blaze, features commentary from Williams and Pink after the visit. Pink explained she’s lived on the street there for six years, and Williams for longer, and the duo have big plans to expand in the future,” The American Mirror reported when they first shared the video, which is included below —