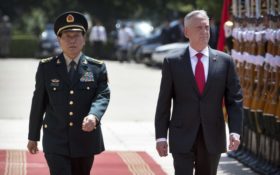 In opening comments before Mattis’ meetings with President Xi Jinping and Defense Minister Wei Fenghe, the leaders avoided any mention of the topics that have recently dominated the relationship and likely ate up significant portions of the talks — Taiwan, Chinese militarization of the South China Sea and the ongoing negotiations with North Korea to end its nuclear program.

Instead, they focused on the importance of the U.S.-China military relationship and how to continue that momentum.

“This is an important time in the history of China and the United States as we work our way forward,” Mattis said as he sat with Xi in front of a bank of cameras and photographers prior to their private meeting. “It reminds me just how important this is for both of our nations. So I’m here to keep our relationship on a great trajectory, going in the right direction, and to share ideas with your leadership, your military leadership, as we look at the way ahead.”

A description of Mattis’ morning meeting with Wei, put out by China’s official People’s Daily, said the Chinese defense minister laid out Beijing’s position and concerns on Taiwan, the South China Sea and North Korea, but provided no details.

And it said Wei reiterated China’s standard line on insisting on peaceful development and the military’s “unswerving” commitment to national sovereignty, security and development interests.

“Only through insisting on no conflict, no confrontation, mutual respect and win-win cooperation can the sides achieve common development,” Wei said, adding that military-to-military relations can “become stable factor in ties between the two countries” as long as they manage risks and increase trust and cooperation.

During his public remarks, Mattis said he and Wei began discussions with a “very open and honest dialogue.”

In a late afternoon meeting, Xi — who also heads the commission overseeing the People’s Liberation Army — called relations between the militaries a “model component of our overall bilateral relations.”

Mattis, a retired Marine Corps general, said the U.S. assigns the same degree of importance to the relationship.

The public comments, however, belie recent months of increased tensions between the two countries, including Mattis’ sharp criticism, in front of an international security conference audience, of Beijing’s militarization of the Spratly Islands in the South China Sea. As a result, the Pentagon disinvited the Chinese navy from a multinational naval exercise the U.S. is hosting this summer in what it called “an initial response” to China’s fortressing of man-made islands in the crucial waterway.

And next week the United States is to start taxing $34 billion in Chinese goods and later add tariffs on an additional $16 billion in goods. Beijing has vowed to immediately retaliate with its own tariffs on U.S. soybeans and other farm products.

Mattis, however, went into the talks determined to focus discussions not on the irritants that divide the two nations, but on the broader military relationship.

And the U.S. is hopeful that Beijing, which has long been an ally of North Korea, can help push Pyongyang in the negotiations to denuclearize the peninsula. China is the North’s main source of aid, trade and diplomatic support and backs Pyongyang’s call for a “phased and synchronous” approach to denuclearization, as opposed to Washington’s demand for an instant, total and irreversible end to the North’s nuclear programs.