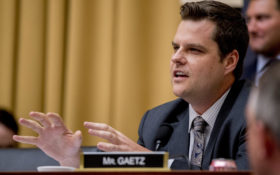 Rep. Matt Gaetz, R-F.L., was ready and waiting for his turn to speak at a Thursday during a House Judiciary committee hearing involving the U.S.-Mexico border crisis.

And what he played on his phone shocked the room — and had Democrats were left scrambling to shut him down.

“The gentlelady from Texas in her prior claim of time said it was ‘offensive’ to assert that Democrats were in denial about the crisis on the border,” Gaetz said, referring to a Texas Democrats recent statement.

“I would invite my Democratic colleagues to go to my official Twitter account where I have posted an interview from January 9, 2019, it was on CNN, not exactly a hostile network for you folks, and it’s…. well, let me just play what the question was and it’s Jim Clyburn, the Democratic whip, answering the question,” he continued.

Gaetz then pressed play on his cell phone, and audio of an exchange between House Majority Whip Jim Clyburn — one of the highest ranking Democratic in the House — and a CNN host from earlier this year. The CNN interviewer asks Clyburn if there’s a “humanitarian crisis” at the U.S. southern border.

Clyburn laughs at the remark and says, “Absolutely not.”

Gaetz sat in silence and repeated the clip six times in a row until a Democratic congresswoman tried to object.

“Is it appropriate for a Member to just put on a loop, a teeny soundbite out of context?” Rep. Madaline Dean, D-P.A., asked. “Is that even allowed?”

Once Gaetz had the floor again, he went off on the Democrats.

“I just think it’s quite something that, when you’re fed back your own words from your own leadership from earlier this year, you think that’s out of context and inappropriate and not allowed,” he said. “Again, we didn’t raise the issue.”

“It was the gentlelady from Texas that said ‘these allegations from Republicans that we were in denial — they’re offensive,'” Gaetz said, summarizing the Democrats. “‘We’ve always known of the crisis.’ And the Democratic Whip laughed! ‘Absolutely not.’ Laughed! He thought it was laughable.”

“One of the reasons why so many young people, so many vulnerable people are in tragic conditions is because we didn’t act when the [Trump] administration wanted us to provide funding that was absolutely necessary to care for people,” Gaetz added.

“It is appropriate to question why we are in these conditions,” Gaetz continued. “But it wasn’t the Republicans that were in denial: It was all of you.”

“And it was in your own words from your own leadership,” he finished.

“Be offended with the Democratic Whip, not House Republicans.”

Dems, when they’re fed back their own words, from their own leadership, from earlier this year, they think it’s inappropriate!@WhipClyburn laughed at the crisis on our border. Thought it was funny. You know who doesn’t think it’s funny? The @realDonaldTrump administration. pic.twitter.com/LmC0WgIHsU