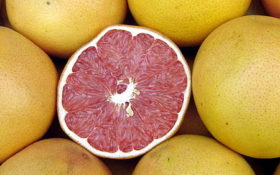 Traffic came to a citrusy standstill when nearly 1,000 grapefruits spilled from a delivery truck onto the Florida Turnpike in Orange County, authorities said.

The fruit-hauling truck was traveling on the turnpike Wednesday afternoon when crates inside the vehicle broke, Florida Highway Patrol Lt. Kim Montes said. The grapefruits spilled from the vehicle and blocked a section of the roadway near Ocoee, the Tampa Bay Times reported.

The truck pulled over so the remaining fruit could be secured. Traffic was stopped completely for several minutes while state workers cleaned up the spilled citrus to open up one lane. Video taken by witnesses showed crews using push brooms to round up the rolling fruits.

It took another three hours to clear the rest of the roadway and return traffic to normal.