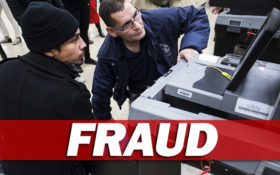 For months, President-elect Donald Trump warned Americans that the election would be rigged.

Now that the results of the recount are in, a massive scope of discrepancies in Democratic precincts has been uncovered.

The Horn News first reported on December 8th on the massive voter fraud that was uncovered during the Michigan recount.

Now, more exact details have revealed just how bad the election fraud was — and the numbers are stunning. In one heavily Democratic county, there were too many votes in a staggering 37 percent of precincts.

“Detailed reports from the office of Wayne County Clerk Cathy Garrett show optical scanners at 248 of the city’s 662 precincts, or 37 percent, tabulated more ballots than the number of voters tallied by workers in the poll books,” The Detroit News reported Tuesday.

Read that again, and let the horror sink in.

More than one-in-three precincts in Wayne County — one of the largest in Michigan and a heavily Democratic area — had more votes than should be mathematically possible.

Don’t worry, it gets worse.

The problems were significantly more pronounced in the city of Detroit, where serious discrepancies meant authorities were legally prohibited from recounting votes in 392 precincts, or nearly 60 percent.

In other words, in Michigan, if there are too many votes found, authorities are prohibited from officially recounting ballots.

And nearly two-thirds of those Detroit precincts were not officially recounted because they had too many votes.

To be fair, some election officials say human error could be to blame.

But experts and other election officials say that seems unlikely.

In fact, some of the most vocal critics say the “human error” story is just crooked officials trying to cover their tracks.

Genesee County Clerk John Gleason told The Detroit News that the number of pages can cause machines to jam.

Normally, Gleason said, that leads them to count less votes. But in fairness, the issue does occasionally lead to ballots being over counted.

“Usually, if there’s a problem, it tends to be more voters than votes,” Gleason said. “But when we’re off, we should be very, very close, like one ballot.”

That means the math doesn’t add up, because the apparent election fraud in these Democratic precincts went well beyond one or two ballots.

For example, a recount election observer at Wayne County Precinct 152 noted that while over 306 votes were counted, there were only 50 actual ballots – which means six-times the amount of votes were counted there.

“There’s always going to be small problems to some degree, but we didn’t expect the degree of problem we saw in Detroit. This isn’t normal,” said the chairwoman of the Wayne County Board of Canvassers, Krista Haroutunian.

That’s just one precinct out of the hundreds discovered over-stuffed ballot boxes — and local authorities are sounding the alarm to anyone that will listen, because this isn’t the first time “massive election fraud” has been noted in Wayne County.

Earlier that same year in Wayne County, three men were charged with election fraud after investigators said they attempted to sell hundreds of Democratic votes to candidates in exchange for cash.

Former Detroit mayoral candidate Tom Barrow claims the 2016 election fraud is a result of systematic political corruption that has infested the Democratic area.

And Barrow says he knows who is responsible: City Clerk Janice Winfrey, who he has claimed is behind years of election rigging.

“The city is responsible. Janice Winfrey is responsible,” Barrow said. “This didn’t happen because of crazy, dyslexic senior citizens who are working as poll workers, like they want to portray this. That’s people who are trying to deny responsibility.”

The Michigan recount, a state Trump won by a narrow 0.8%, was halted after three days and only included 20 of the state’s 83 counties.

Some counties hadn’t planned to start until later, so were never investigated by authorities.

But in the counties that were investigated, what was found was shocking.

For years, conservatives have been warning that Democrats were committing election fraud.

And yet the mainstream media says nothing.