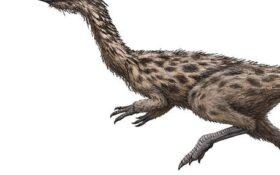 A “swift-footed lizard” that lived millions of years ago in what is now Massachusetts has been named the state’s official dinosaur under legislation signed into law Wednesday by Gov. Charlie Baker.

Podokesaurus holyokensis received more than 60% of the roughly 35,000 votes cast in a social media campaign initiated early last year by state Rep. Jack Lewis, beating out another dinosaur that was also discovered in the state.

“If I think about my own childhood … the thing that got me interested in science in the first place was dinosaurs,” the Republican governor said at the signing ceremony at the Museum of Science in Boston, with some of the state’s leading paleontologists standing behind him. “And the main reason they got me interested is because of their majesty, and their ferocity and their almost alien-being status. As a kid, they just created wonder.”

Lewis came up with the idea of a state dinosaur while trying to find engaging projects for the Cub Scout den he led during the height of the COVID-19 pandemic.

The project did not just get people involved in science, but also taught them about the legislative process, the Framingham Democrat said.

“Hopefully if this project inspires just a couple young girls to grow up and explore paleontology, it would have been all worth it,” he said.

Baker called the creature “a tough, spunky underdog from Holyoke.”

About a dozen other states also have official state dinosaurs, Lewis said.