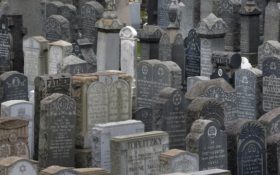 A Massachusetts man has pleaded guilty to selling unused burial plots that had already been purchased by other people and pocketing the cash.

Prosecutors say 71-year-old John Hughes was sentenced Thursday to two years of probation, the first three months of which must be served in home confinement, and ordered to pay nearly $75,000 in restitution to the city of Melrose. He pleaded guilty in Middlesex Superior Court to multiple counts of larceny.

Authorities say Hughes, of Revere, was appointed administrator of a city-owned cemetery in 2007. Beginning in 2011, he started selling unused burial plots at discounted rates, even though the plots had already been sold. He didn’t tell city officials and kept the money. He sold 13 plots in all.