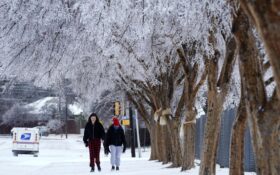 A Massachusetts contestant on “The Price Is Right” was hoping to win a getaway to some tropical locale during a recent appearance on the game show.

Instead she won a trip to neighboring New Hampshire.

Catherine Graham had already won a firepit and a love seat when she was picked to go on stage and play “Side By Side” with host Drew Carey.

Then she found out she’d be playing for a trip to New Hampshire, just across the border from Massachusetts.

Graham confessed she was hoping for somewhere a bit more exotic than the “Live Free or Die” state, which she said she’s already visited “a million times.”

“I just wish it was Tahiti or some place, or Bora Bora. A cruise around the world maybe,” Graham told WBZ-TV, laughing.