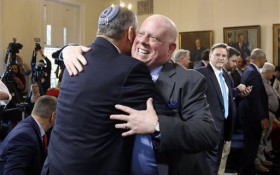 Maryland Gov. Larry Hogan says he’s in complete remission after months of chemotherapy for B-cell non-Hodgkin lymphoma, but he acknowledged the possibility of the cancer returning and said he will continue preventive health care and monitoring. He also said his work to raise awareness about the disease is just beginning.

“Today doesn’t mark the end of a journey for me, merely the end of one chapter,” Hogan said yesterday at a news conference where he was cheered and applauded in a crowded reception room next to his office in the Maryland State House.

Hogan, 59, made the announcement after receiving a PET scan earlier in the day at the University of Maryland Medical Center.

“I’m in complete remission, but as is the case with this particular type of cancer and many others, there’s a chance of it coming back, so they don’t usually say that you’re completely cured until after many years of tests,” Hogan said.

Dr. Aaron Rapoport, Hogan’s oncologist, said the governor will continue to take medication for about a year, and he will be treated as an outpatient.

“Where he is right now is very positive, and God willing it should continue,” Rapoport said.

Experts in cancer treatment say patients with diffuse large B-cell lymphoma like Hogan do go into remission very quickly with aggressive therapy, though they avoid using the phrase cancer-free in the initial months after treatment.

“I don’t use the phrase ‘cancer-free,’ but I do see patients who go into complete remission after going through five or six months of chemotherapy,” said Dr. Otis Brawley, the American Cancer Society’s chief medical officer.

Hogan was diagnosed in June, five months into his first term as governor. At the time, he called it a “very aggressive” and “very advanced” form of cancer in his lymph nodes. The Republican, who won an upset victory last November in the heavily Democratic state, said he had noticed a painless lump along his jaw before he was diagnosed. He also felt some back pain, which he said was caused by a tumor pressing on his spinal column.

On Monday, Hogan choked up as he recalled the outpouring of support he has received from people young and old. Andrew Oberle, a 5-year-old boy from Glen Arm who has leukemia, wrote to the governor giving him advice. Andrew hugged Hogan during the news conference.

“Such acts of kindness have kept me strong and my spirts high and they are undoubtedly among the reasons I’m on the road to recovery,” Hogan said, recalling the many letters and greetings wishing him well.

“The critical time frame for looking for recurrences is that first year,” Broome said.

Lymphoma expert Dr. Nishitha Reddy, an associated professor at Vanderbilt University Medical Center, said she had no details about the governor’s case but that such a quick response to treatment “is not unusual” for lymphoma patients.

“It’s great that he had such a good response, but we usually don’t use the word ‘cure’ right off the bat,” Reddy said.