Maryland gunman to appear in court - The Horn News 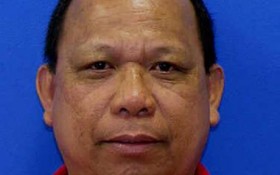 A federal security officer suspected in three fatal shootings outside a high school, a mall and a supermarket in a Maryland suburb of the nation’s capital is due in court for an initial appearance.

Eulalio Tordil, 62, of Adelphi is scheduled to appear in court Monday afternoon in Rockville, Maryland. He faces charges including first-degree murder.

Authorities say the shootings continued Friday at two other parking lots, one outside Montgomery Mall and the other at a shopping center. Police said those shootings, including one in which two other people were wounded, were likely botched carjackings.

A friend of the Tordils said in an interview Sunday evening that he saw the couple as recently as three weeks ago and was not aware they had any troubles. Gary Cochran of Sterling, Virginia, said Eulalio Tordil, who attended high school with his wife, was “always smiling and very polite.”

Cochran said he and his wife “can’t believe this is the person we invited into our home.”

Police said the other victims who died in Friday’s shootings were Malcom Winffel, 45, of Boyds, and Claudina Molina, 65, of Silver Spring.

Winffel and a friend, who wasn’t identified, were shot while trying to help a victim of an attempted carjacking, police said. The friend and the carjacking victim were both wounded.

“He was always helping people,” Pilar Winffel of Columbia said of her brother. “If a friend of a friend was moving, he would go and help.”

At a news conference Saturday night, Montgomery County Assistant Police Chief Russ Hamill said Tordil spoke to investigators a little about the shootings. “I would not describe him as being remorseful,” Hamill said.

Tordil, a federal security officer employed by the Federal Protective Service, was put on administrative duties in March after a protective order was issued against him when his wife said he had threatened to harm her if she left him, The Washington Post reported. Tordil subjected their children to “intense-military-like discipline,” such as push-ups and detention in a dark closet, according to the order.

The protective service said Tordil’s weapon, badge and credentials were taken when he was placed on leave.

Cochran said he had no idea about the protective order, and never suspected any domestic problems.

“I just saw a beautiful family,” he said, adding that Tordil never mentioned the action taken against him at work.

The charges against Tordil carry a maximum sentence of life in prison. Maryland abolished the death penalty in 2013.