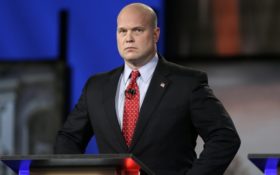 Maryland is challenging the appointment of Matthew Whitaker as the new U.S. acting attorney general.

A draft filing obtained by The Associated Press argues that President Donald Trump sidestepped the Constitution and normal procedure by naming Whitaker to the position in place of Deputy Attorney General Rod Rosenstein (ROH’-zen-styn).

Whitaker was appointed Nov. 7 after the White House demanded the resignation of Attorney General Jeff Sessions. Whitaker had been Sessions’ chief of staff.

The Maryland filing was expected to be made Tuesday in a legal dispute with the Trump administration over the Affordable Care Act. That lawsuit names Sessions as a defendant. The state seeks to name Rosenstein as a defendant over Whitaker.

Spokespeople for the Justice Department haven’t responded to an email seeking comment.