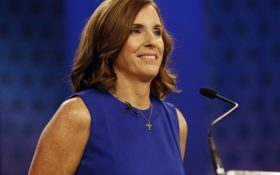 McSally’s explosive accusations came in response to a 15-year-old interview Sinema gave where she stated she did not care if an American wanted to join the Taliban.

Cinema responded to the charges by calling them “ridiculous attacks” and in turn, McSally demanded an apology.

McSally, a former Air Force colonel and combat pilot, made the explosive charge in the final moments of the debate that had already included heated clashes over issues such as health care and immigration.

When she was asked the final question, about climate change, McSally complained there’d been no discussion of national security in the hour-long debate, the only one of the campaign.

She attacked Sinema for protesting the wars in Iraq and Afghanistan and referenced a 2003 radio interview in which the host engaged in a lengthy, rambling hypothetical that ends with him asking Sinema if she’d be OK with him joining the Taliban.

“I don’t care if you want to do that, go ahead,” Sinema replied in that interview, reported by CNN last week, before asking if they can return to explaining her anti-war stance.

McSally described that exchange Monday as Sinema saying “it was OK for Americans to join the Taliban to fight against us.” Then, turning toward Sinema and pointing at the Democrat, she asked if she going to apologize to veterans like herself for saying “it was OK to commit treason.”

Sinema said: “Martha has chosen to run a campaign like the one you’re seeing right now where she’s engaging in ridiculous attacks.” After the debate, Sinema called the charge “ridiculous.”

The two congresswomen are vying for the seat of Republican Sen. Jeff Flake, who is retiring. The Arizona Senate seat of the late John McCain is filled by appointee Jon Kyl until a 2020 election.

McSally is a supporter of President Donald Trump and she hopes his visit to Arizona on Friday helps unites Republicans against Cinema.

Sinema represents a district based in the Phoenix suburb of Tempe and is a former Green Party activist who transformed herself into a centrist Democrat. She has one of the most conservative voting records among Democrats in Congress and presents herself as a nonpartisan problem-solver.

Both congresswomen engaged in attacks Monday night as they have throughout the race, Democrats and Sinema have hammered McSally for voting to weaken protections for people with preexisting conditions and for shifting to the right on immigration. McSally dismissed those charges as “lies” Monday as she tried to steer the conversation back to Sinema’s old anti-war activism.

Sinema contrasted her own voting record with McSally’s, saying her rival was a blind partisan who voted 98 percent of the time with President Trump.

Citing Sinema’s support for Trump, McSally scoffed: “60 percent with the agenda is a failing grade in every school.”

According to Fox News, a poll taken last month placed Sinema in a 2-point lead over McSally, 47 to 45 percent.