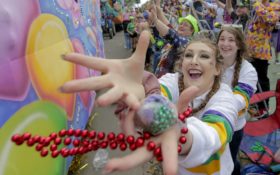 As Carnival season nears its raucous pre-Lenten climax on Mardi Gras (Fat Tuesday) next week, the handing out of tests during the Krewe of Muses parade is emblematic of the city’s effort to avoid a surge of COVID-19 infections, hospitalizations and deaths while reviving cherished, and economically vital, Carnival events. Those events were largely silenced in 2021 after officials realized the 2020 celebration had been a “superspreader” event that made Louisiana an early Southern hot spot for the disease.

The city health department said Wednesday that staff and volunteers would be parading at the head of Thursday night’s Muses procession, some in the back of a pickup truck and some walking alongside, to hand out test kits.

Parade watchers who receive a kit will be encouraged to test themselves and use a special QR code on the package to anonymously report the results to help the health department study the effects of Carnival season on the city’s health. The health department said rapid tests also would be available for several hours for people arriving at the airport on Thursday, Friday and Saturday.

“If we want to participate in the activities we love at Carnival, we can’t let our guard down,” Dr. Jennifer Avegno, the city’s health director, said in a news release. “COVID is not over yet, and we need to use every tool at our disposal to prevent a repeat of the tragedies of Mardi Gras 2020.”

Carnival revelry is already being tempered by several restrictions: Entry into bars, restaurants and numerous other indoor venues requires both a mask and proof of vaccination or a recent negative test. Float riders in city parades are required to be vaccinated.

Visitors are returning for this year’s celebration, if not in numbers from years past. Tourism officials say about 89% of the 26,000 hotel rooms in downtown New Orleans and the French Quarter will be filled Saturday, down from nearly 98% for the same Saturday in 2020.

How strictly will the mandates be enforced? While businesses that run afoul of the requirements run the risk of sanctions, “There are no mask police,” city spokesman Beau Tidwell said at a news conference this week, emphasizing the need for cooperation by residents and visitors.

Tidwell found himself having to defend Mayor LaToya Cantrell amid social media criticism over pictures of her and other city leaders, sometimes without masks, at a Carnival ball. Tidwell said Cantrell removed her mask for pictures and to eat and drink, but acknowledged “we need to do a better job of modeling the expected behavior.”

Muses is among a group of “super krewes” with the largest and most elaborate high-tech floats. The all-female group’s signature parade handouts are glittery, hand-decorated high-heeled shoes. The parade is one of nearly two dozen that are set to roll in the city Thursday through Tuesday.