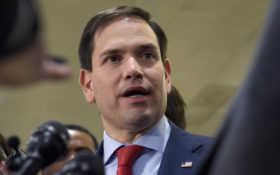 Hogg has been meeting with senators all week as the Senate prepares to deliberate on the two gun bills passed by the House.

However, Hogg claimed, falsely, that he was being avoided by Rubio’s office.

“Rubio staff said I can’ meet with him or his staff just because I ‘trigger’ him,” Hogg tweeted Thursday, according to a screenshot. “I just wanna have a conversation. Please meet with me.”

Rubio’s chief of staff denied the allegations, and he claimed to have scheduled a meeting with Hogg.

“No one said such a thing,” Rubio Chief of Staff Michael Needham said on Twitter. “As for the meeting, you must be confused as we had a 2p meeting scheduled with you. However, since you are lying and clearly using this all for self-promotion, that meeting is now cancelled… Don’t lie again — we have receipts.”

Hogg acknowledged the error and described the incident as “an honest mistake.”

“Got our meetings confused in the flurry and my staff misinformed me,” Hogg tweeted at Rubio. “I apologize. We’d still love to meet with you and have an honest, respectful discussion.”

Hogg deleted the false tweet but posted a screenshot “for transparency.”

.@marcorubio an honest mistake, got our meetings confused in the flurry and my staff misinformed me. I apologize. We’d still love to meet with you and have an honest, respectful discussion. Deleted the tweet bc it wasn’t true but attaching here for transparency. pic.twitter.com/icmaLoSA0C

Also, the reporter doing a profile of you knows the meeting is real since she was emailing yesterday with our comms team about it. Don’t lie again — we have receipts.

Hogg first gained national attention in 2018 after surviving a school shooting in Parkland, Florida. After that, he helped to organize the March for Our Lives, and he co-founded Never Again MSD, a liberal political action committee devoted to gun control.

Since the shootings from Buffalo to Uvalde, Hogg has once again been speaking to the national press and meeting with high-profile politicians. This time, he’s been supporting a bipartisan approach to gun safety.

“We’re building a movement of D and R, gun owners and non-gunowners, survivors, young people, old people, teachers, everyone invested in protection of our kids and loved ones of all ages,” he tweeted Friday. “I’m marching tomorrow in DC and with Hundreds of thousands of Republicans, gun owners, Dems and many others in 450 plus cities who all agree we need to put our politics aside to focus on what we can agree on and act.”

Sure enough, Hogg wrote an op-ed in Fox News, intended “specifically for people who disagree with me.”

However, he also claimed to have protested outside the office of Sen. John Cornyn, R-Texas. Even President Joe Biden has described Cornyn as “rational” in his approach to guns.

Meanwhile, Hogg has apparently been speaking on liberal networks like MSNBC and meeting with gun-averse Democrats like Sen. Ed Markey of Massachusetts.

Still, he has clashed with Democrats occasionally. On his Twitter profile, he included a picture of a sign pressuring Senate Democrat Leader Chuck Schumer for “BACKGROUND CHECKS NOW!!”

Hogg, 22, said that he is studying history at Harvard University.

I was in Texas last week protesting outside @JohnCornyn’s office. It’s long past time for him to prioritize his constituents over the NRA. Retweet if you agree.

Thanks for meeting with a small part of our lobbying volunteers @EdMarkey pic.twitter.com/ywSnVKXx4t