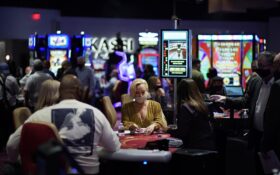 The state Gaming Control Board reported Thursday the $1.35 billion that casinos statewide reaped was just shy of the best-ever monthly mark of $1.36 billion set last July.

The authority noted the return of more trade shows and conventions, and said hotel occupancy at the more than 150,000 rooms in and around Las Vegas topped 80%.

Harry Reid International Airport tallied nearly 4.3 million passengers in March, down only about 140,000 from its pre-pandemic total in March 2019 — a year the airport tallied a record 51.5 million arriving and departing travelers.

The airport’s 154,000 international travelers in March was up more than 50% from February, and flights from overseas are scheduled to ramp up in April with additional service to cities in Mexico, Canada, Panama, the Netherlands, Germany, Switzerland and the United Kingdom.

International travel all but stopped during the coronavirus pandemic.

The state collected almost $98 million in taxes based on March casino winnings, the Gaming Control Board said. The figure is important because casino taxes make up about 17% of state revenues, second only to sales taxes. Nevada has no personal income tax.