Mansion of famous murder up for sale - The Horn News 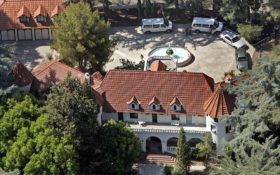 The hilltop Los Angeles-area mansion where music producer Phil Spector killed actress Lana Clarkson in 2003 is for sale at $5.5 million.

The Daily News reported Sunday that the walled French-style chateau known as “Pyrenees Castle” sits on 2.5 acres (1 hectare) in Alhambra.

Spector is serving a sentence of 19 years to life after his second-degree murder conviction in Clarkson’s death. The 40-year-old actress — star of the 1985 cult film “Barbarian Queen” — was found shot to death in the foyer of the 8,700-square-foot (808-square-meter), nine-bedroom home.

Jurors were taken to the castle to inspect the scene of the crime during two trials. The first ended in a mistrial.

The 79-year-old Spector is known for his “Wall of Sound” recording technique developed in the 1960s.