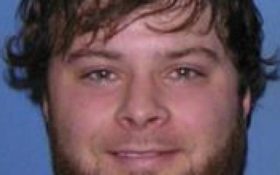 Authorities arrested a man Wednesday suspected of shooting a Kansas convenience store clerk and kidnapping two hikers in New Mexico while on the run after his girlfriend was killed and a jogger was shot in Mississippi.

Alex Bridges Deaton, 28, was arrested after a chase and fiery crash near the town of Wilson, Kansas, about 80 miles from where the clerk was shot, according to a tweet from Kansas Highway Patrol trooper Tod Hileman. He said neither Deaton nor the involved officers were seriously hurt.

Hileman didn’t immediately return a phone message from The Associated Press seeking details about the case.

Mississippi officials have accused Deaton in the strangling death of his girlfriend, 30-year-old Heather Robinson, who was found dead Friday in her suburban Jackson apartment. He also is suspected in a drive-by shooting that injured a jogger and is considered a person of interest in the shooting death of a woman found dead at a rural church near Philadelphia, Mississippi.

New Mexico authorities reported that a man believed to be Deaton carjacked and briefly abducted two hikers late Tuesday at a trailhead in mountains near Albuquerque. One hiker was shot, but his wounds were described as non-life threatening. Sandoval County sheriff’s officials said the man and a woman were forced at gunpoint into the trunk of their car, and that the man was wounded after they pulled the emergency-release lever to escape.

Kansas authorities began pursuing Deaton because he was driving a vehicle reported stolen in New Mexico. The suspect ditched the vehicle before shooting the clerk and stealing another vehicle, according to Pratt County sheriff’s officials in Kansas.

The chase resumed on Interstate 70 near the town of Dorrance, Kansas, when authorities tried to stop a vehicle matching the description of the one stolen from the convenience store’s parking lot, Hileman said.

The trooper said authorities used tire-puncturing devices before the suspect began driving toward Wilson in Ellsworth County. The chase ended around 8 a.m. with a crash after a “tactical vehicle intervention,” Hileman said. Deaton then was arrested.