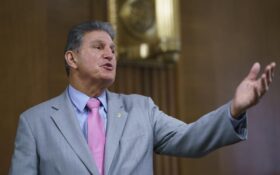 Manchin has won all his statewide elections since the year 2000, despite running as a Democrat in one of our nation’s most Republican states.

Manchin may run out of luck during a campaign for reelection in 2024. According to a bombshell poll, Manchin is in deep trouble.

Pollsters at Jackson County WMOV 1360 AM surveyed 762 respondents via voice message between Aug. 24 and Aug 26. They found a shocking result.

A decisive 50 percent of respondents would vote for Morrissey over Manchin, with Manchin receiving only 36 percent of the vote. The remaining 14 percent remained unsure.

Manchin hardly fares better in a Senate race against Justice, a former Democrat himself.

Manchin fares slightly better against Mooney, with the senator losing by “only” seven points. Earlier this year, Manchin escalated a feud with Mooney by endorsing another candidate in the Republican primary.

The state surprised pollsters by flipping toward Republican George W. Bush in the year 2000. Since then, West Virginia has only become redder. It ranked as the nation’s most Republican state during 2016’s presidential race, although it ceded this honor to Wyoming during the next election.

Manchin, a Democrat, won a race for State Secretary despite Bush winning the same constituency at the same time. He won similar victories for governor in 2004 and 2008, before winning a special election to the Senate in 2010.

However, Manchin has been seeing diminishing returns as a Democrat in a state trending long-term toward the Republicans. He won reelection by 24.1 points in 2012… but he won by only 3.3 points in 2018, despite a historic blue wave.

Next time, Manchin appears unlikely to benefit from a blue wave. He is scheduled to run for reelection on the same ballot as the presidential candidates, and presidential races can harden a state’s partisan lines.

It remains unclear whether the pollsters surveyed likely voters, registered voters, or the general populace of West Virginia.

The GOP has been gaining ground in this state… and the Republicans are catching up to Manchin.