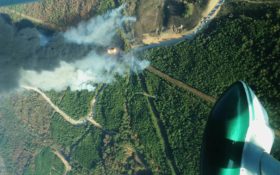 A man with autism relied on his Boy Scout skills to find drinkable water and stay safe while he was lost in New York’s Adirondack woods for 50 hours during a heat wave, according to forest rangers and family members.

Bruce Williams floated on his back in a lake to conserve his energy, located safe drinking water from a stream and stayed calm as he awaited his rescuers, who found him sitting on a rock Monday afternoon, according to the Times-Union of Albany.

The 29-year-old was an Eagle Scout, the highest Boy Scout rank. The Albany-area resident has problems communicating. He also has weak peripheral vision and motor dysfunction.

“He knew enough not to eat anything from the forest. He knew to drink water and stay hydrated. He knew to stay visible on that rock. He didn’t panic,” said Lt. Brian Dubay, a state forest ranger who led the search. “So I think some of those skills are innate from that Boy Scout background and training.”

Williams left his family’s camp in the Adirondack foothills for a lake swim at about 2:30 p.m. Saturday, when temperatures climbed into the 90s. Forest rangers using four-wheelers and drones began their search that evening.

On Sunday, Williams found a tent site and lean-to near a lake and decided to take a swim to stay cool.

“The current carried me all the way away,” Williams told the newspaper.

Far from shore and tired from swimming, he thought of the Boy Scouts, relaxed his body, and began to float.

Rangers found him after 4 p.m. Monday on a rock near the eastern shore of the lake. He was sunburned, bug-bitten and scratched up, but otherwise in good health and spirits, Dubay said.

“It was a happy ending,” said his mother, Janet Williams. “You don’t really hear too many happy endings.”