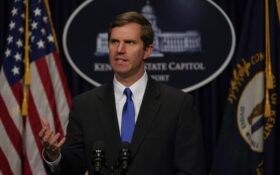 A protester who participated in hanging an effigy of Kentucky’s governor at an armed rally on the State Capitol grounds has been fired from his job at an auto dealer.

Neil Huffman Auto Group said it terminated the unidentified employee after an internal review, saying it “does not condone threats of violence in any form.”

“There is no place for hate or intolerance at any of our dealerships,” Shannon Huffman, the auto dealer’s human resources manager, said on social media Tuesday evening.

Gov. Andy Beshear responded to a question Wednesday about the firing, saying “different decisions have consequences and I would hope that we would all make better decisions.”

“But you don’t simply in the moment make a dummy with somebody’s face on it and hang it up,” the Democratic governor said. “I think what we saw was an act intended to create fear and terror.”

The protester fired was identified by the Courier Journal as Terry Bush, president of the Kentucky 3 Percenters group. His dismissal was confirmed by his wife, Patsy Bush, the newspaper reported.

“He was fired because this governor is more important than the regular Joe out in this state trying to put food on their tables,” Patsy Bush told the newspaper Wednesday.

The effigy was hanged in a tree near the State Capitol during what was billed as a protest rally in defense of constitutional rights, including the right to bear arms.

The rally turned into a protest against coronavirus restrictions and Beshear’s administration, according to news reports, with protesters chanting outside the Governor’s Mansion for him to come outside.

The playing of Lee Greenwood’s song “God Bless The USA” at the protest angered the singer.

“I am furious that they used my song in an attempt to give strength to their event, and do not condone their behavior and its use in conjunction with a suggested lynching, even one that is purely symbolic,” Greenwood said in a statement.

“To be clear, I absolutely support the right for citizens to unite in protest and public gathering. However, my song was written solely to inspire and unite, not further divide and distance our country, certainly as in times of strife as we are today.”