Man terrorizes wife with ax over his broken toys!? - The Horn News 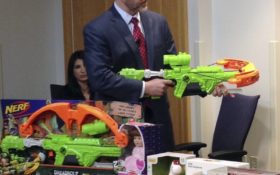 Wisconsin police say a 34-year-old man who thought his wife damaged his action figures retaliated by taking an ax to the family’s car, television and laptop in the house.

Madison Police Chief Mike Koval says the man called police just after 10 p.m. Sunday and told them he had too much to drink and overreacted about his action figures.

Police say the man struck the car’s windshield so hard the axe got stuck.

The man’s name was not released. He was arrested and faces charges of disorderly conduct and felony damage to property.