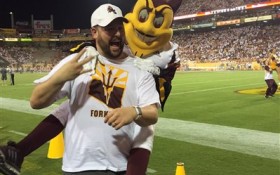 A suburban Phoenix official filed a claim for reimbursement against Arizona State University, saying the school mascot seriously injured his back when the costumed character playfully leaped on him at a football game two months after surgery.

Tempe City Councilman David Schapira said the mascot’s prank on Sept. 18 set back his recovery and led to a four-day hospital stay and physical therapy. Schapira is seeking more than $96,000 in damages and an additional $27,000 to reimburse the city for his medical bills, The Arizona Republic reported.

“I was almost healed from the back surgery,” Schapira told The Associated Press. “It’s frustrating just having to deal with it day to day but that doesn’t mean I’m mad at anybody. Everyone keeps trying to play that angle, but I’m not.”

The ASU Sun Devils’ mascot Sparky jumped on Schapira’s back while he was taking a photo on the sidelines during halftime of the game. The councilman said he was using a cane and had just handed it to his wife to hold when the mascot pounced. He thinks Sparky probably didn’t see him walking with it earlier.

ASU officials have already publicly apologized and promised to cover his medical expenses from the mishap. The claim is simply part of that process, Schapira said.

“It’s the only way. The state can’t just pay a claim to someone. You have to file a notice of claim in order for them to pay anything,” Schapira said.

A message left at ASU’s Office of General Counsel was not immediately returned Wednesday, the federal Veterans Day holiday.

Schapira, who will complete his master’s degree in education leadership from ASU next month, said he has no ill will toward whoever was playing the mascot that day. But he might have felt differently if it had been the mascot at rival school, University of Arizona.

“If it had been Wilbur Wildcat, U of A’s mascot, I’d have been livid,” Schapira said.