Man steals urn with ashes after funeral - The Horn News 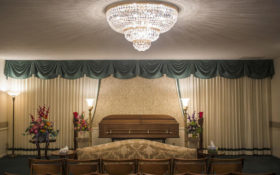 Family members say someone stole an urn with a man’s ashes after his funeral in Pennsylvania.

A service for 42-year-old Sam Abreght was held over the weekend at the Salvation Army in York. His cremains were divided into three urns, one of which was to go to his mother.

Family friend Sherrie Ritz tells WGAL-TV most people gathered in a backroom after the funeral and that’s when the urn was taken.

Ritz is asking the person to return it.