Man shot during argument over Super Bowl - The Horn News 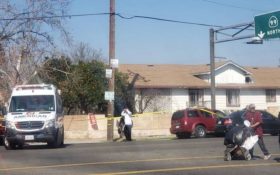 A man shot during an argument over the Super Bowl has died in central California, police said Sunday.

The suspect walked up to a home having a front-yard barbecue in Fresno on Saturday and started arguing with another man over the game, police Lt. Charlie Chamalbide said.

The argument escalated and the suspect shot the victim in the abdomen with a makeshift weapon, Chamalbide said.

The victim was taken to a hospital where he had surgery before he died, KRON-TV reported. Police said he was a man in his 20s visiting from out of town. His name was not immediately released.

The suspect, described as a homeless man in his 30s, was later arrested with the help of witnesses, police said.

Officers were looking for the weapon, which was some type of makeshift gun, Chamalbide said.